Review Yuuki Yuuna is a Hero: The Mankai Chapter 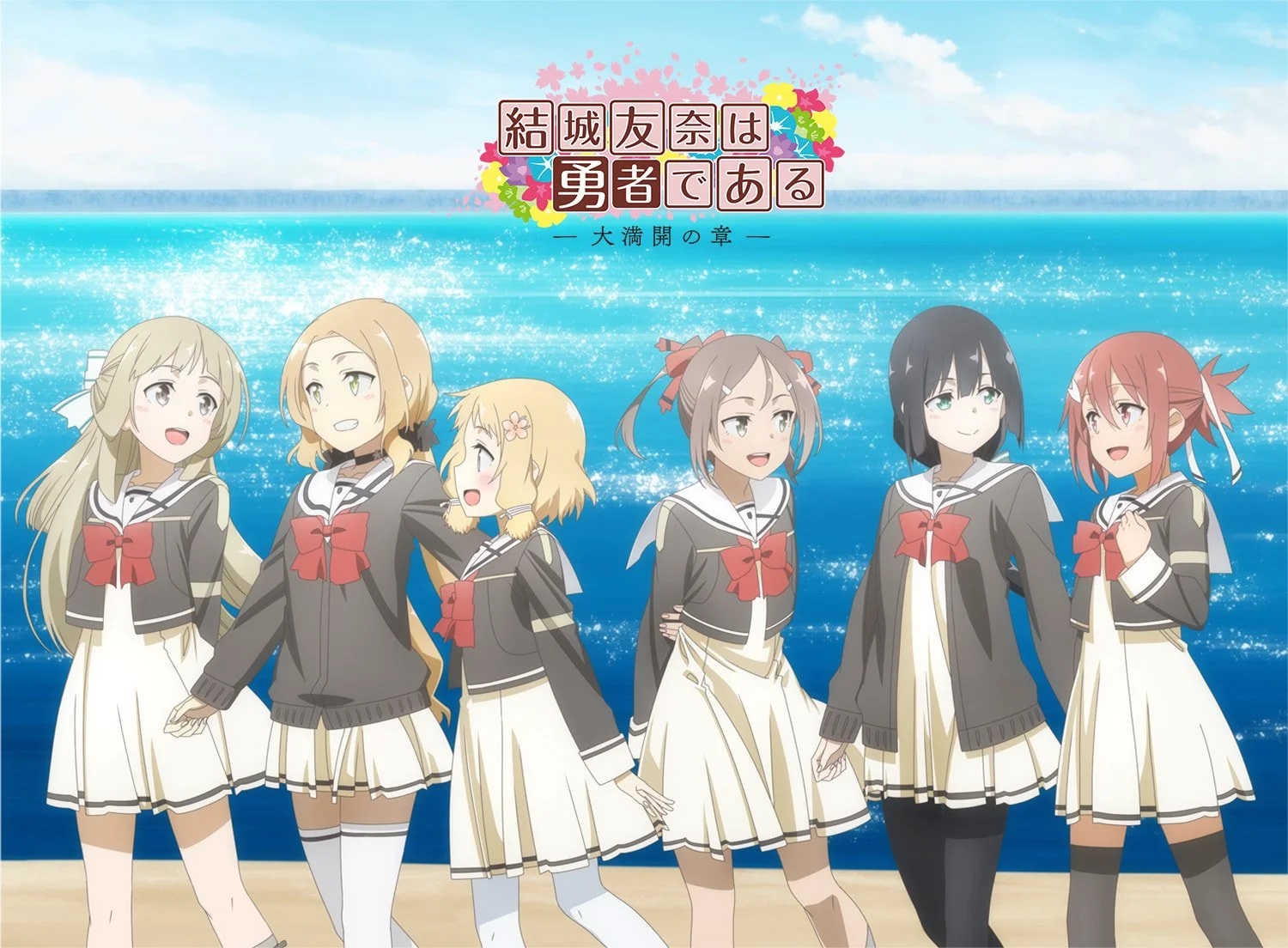 After their triumphant victory the girls can finally enjoy a normal childhood that they have dearly missed. Unfortunately for them, duty soon beckons and when the mysterious Taishou summon Togo Mimori for another mission it is not long before the girls are plunged into yet another crisis. Can the girls come out of this unscathed or what price will they pay to maintain peace and world order?

Just as a little orientation, despite this being a sequel there are significant number of events that overlaps with previous seasons with some scenes even occurring concurrently. As such it is recommended you make yourself familiar with the Washio and Hero chapters as those seasons are most crucial in understanding what is a confusing series to follow. Although if you can, it is recommended you watch the original season as well. 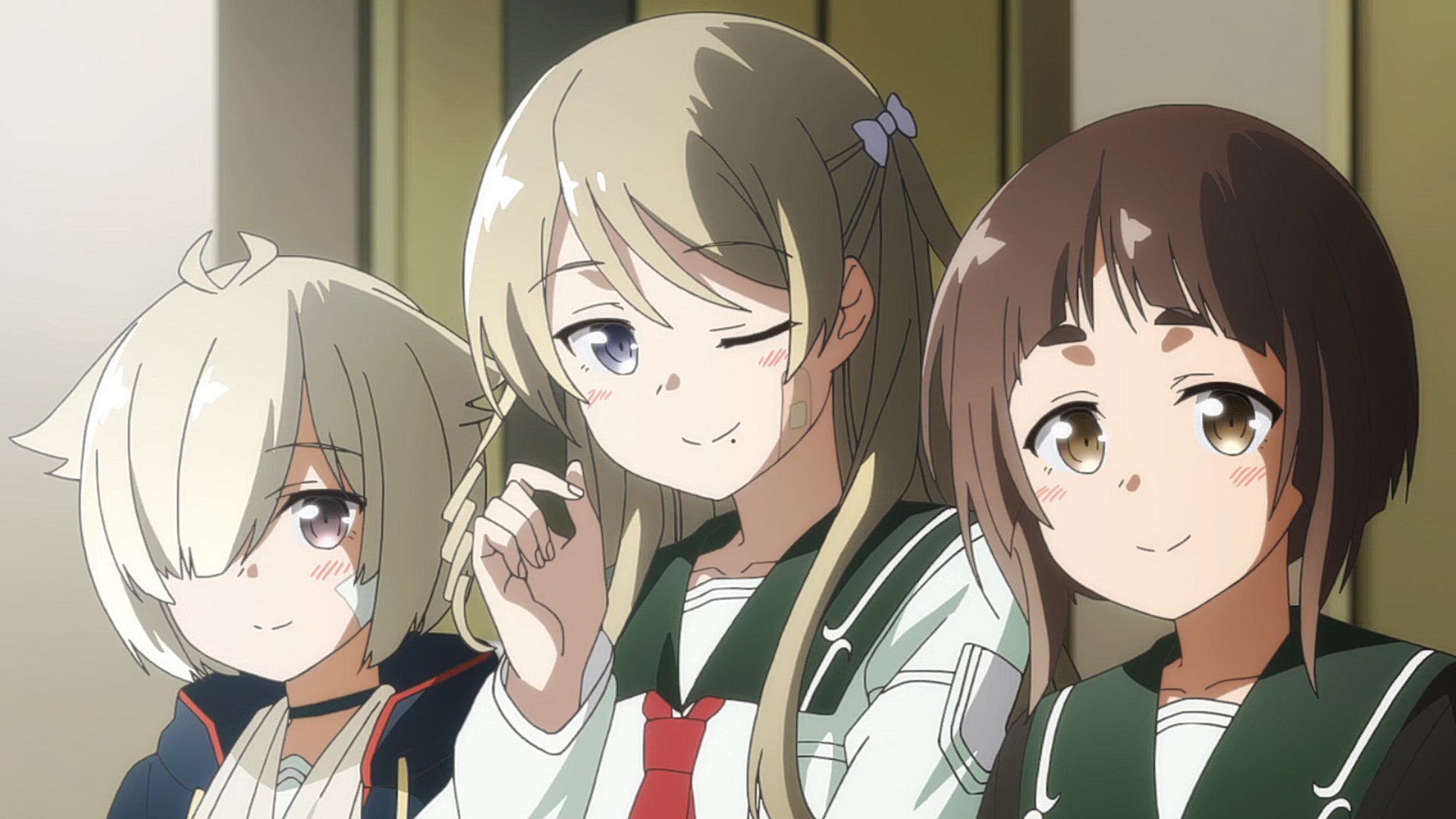 With the conclusive ending we got in the Hero chapter veterans of the franchise are probably asking what can the Mankai chapter could do to extend a story that very clearly ended? Well, this season largely achieved this feat by delving into some side-stories offering viewers a more complete picture of the Yuuka Yuuna world.

The Mankai chapter covers two side-stories through two arcs which culminates in what is essentially a rehash of the Hero ending and then caps things off with an epilogue of sorts. Excluding the rehashed ending, the goals of the series sound reasonable enough right? Well, like most ideas, the power lies in the execution and in this case, it was less than stellar.

While the season opener starts of in a cheerful typical Yuuki Yuuna fashion it is when we get to the first arc when we begin to question the direction of the series. Now to the shows credit, the series does try something new but the issue here is the way things are presented. A lot of new characters are introduced in quick succession and this makes it tricky to keep abreast of all the events going on. 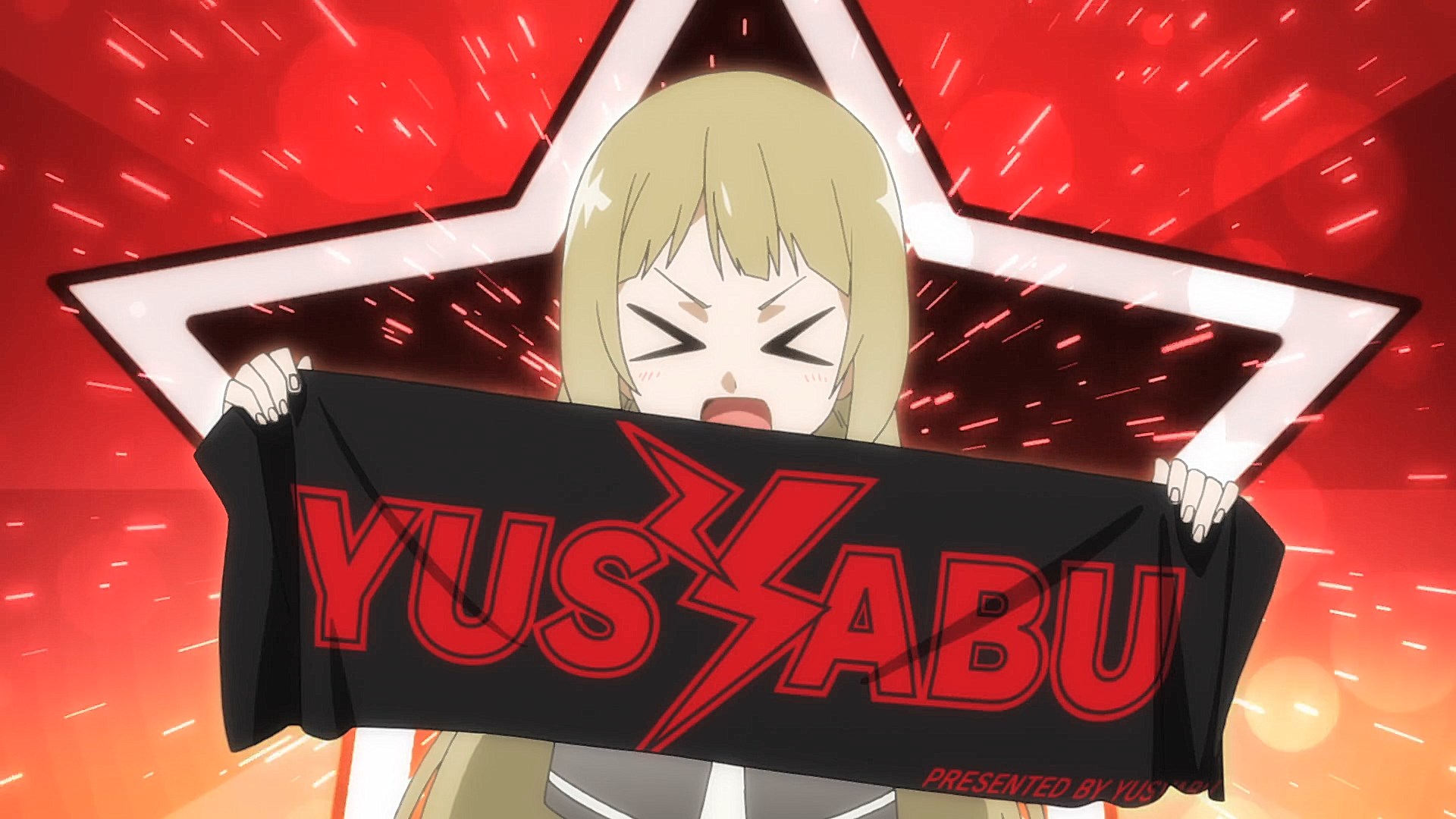 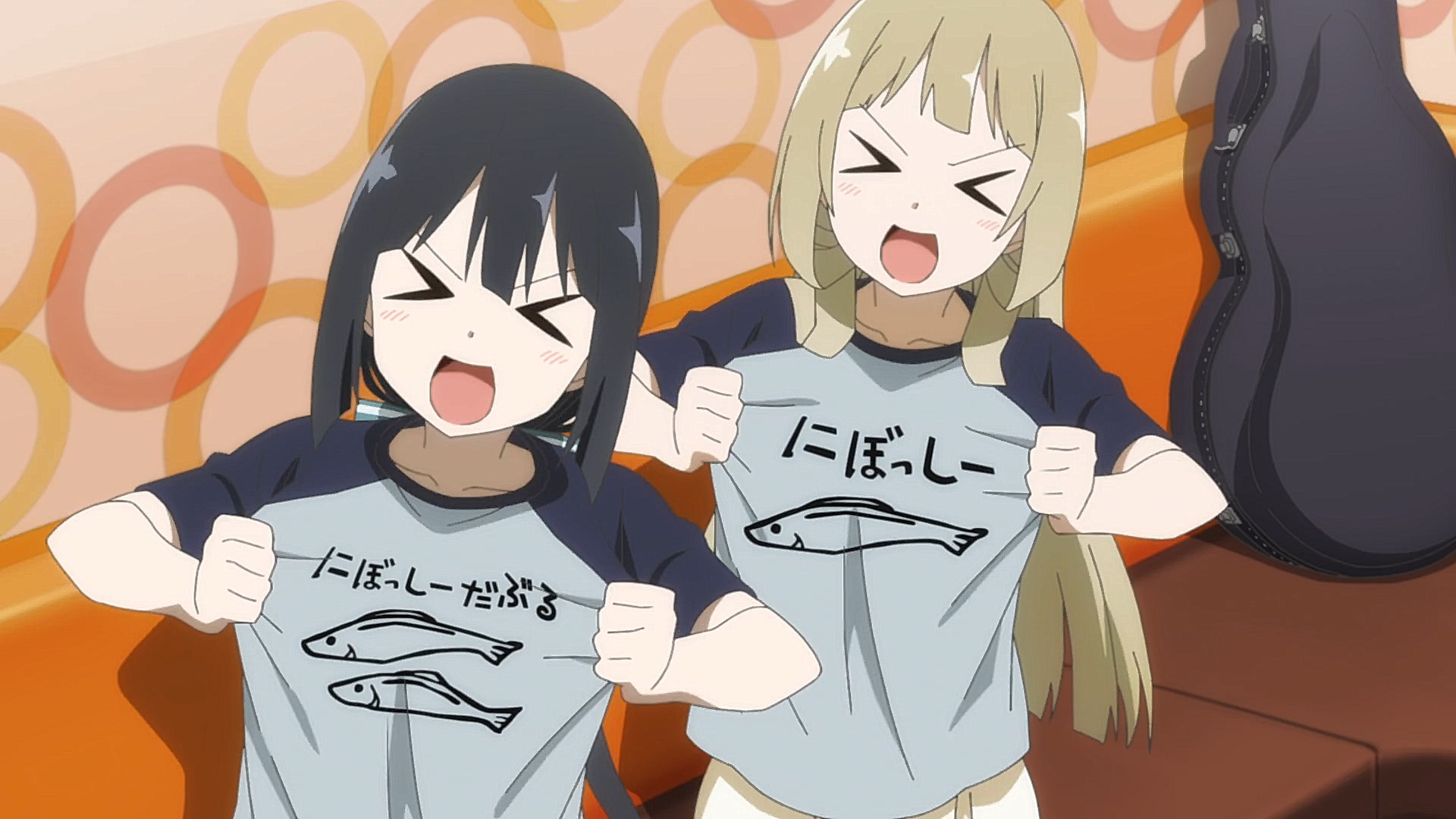 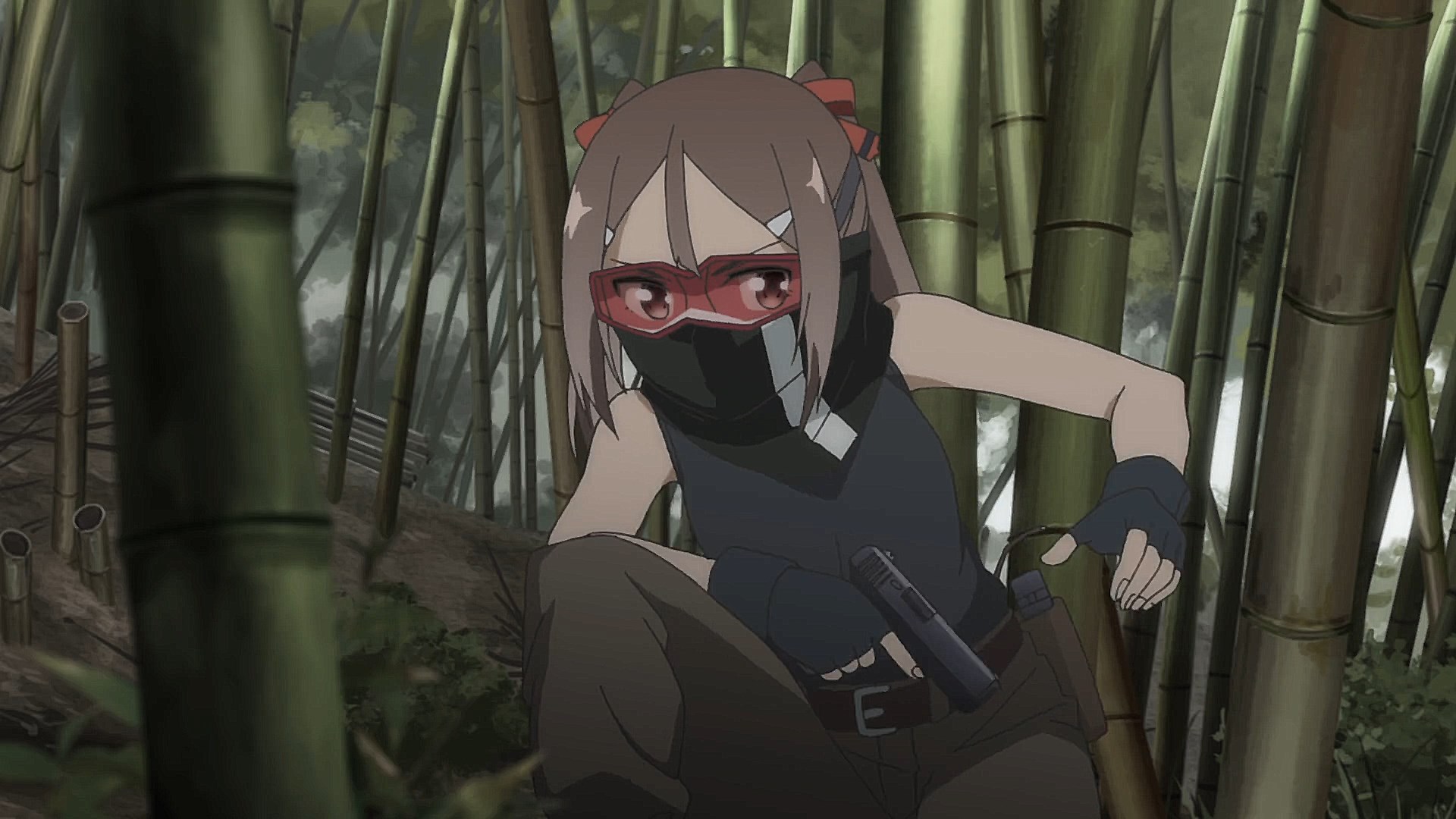 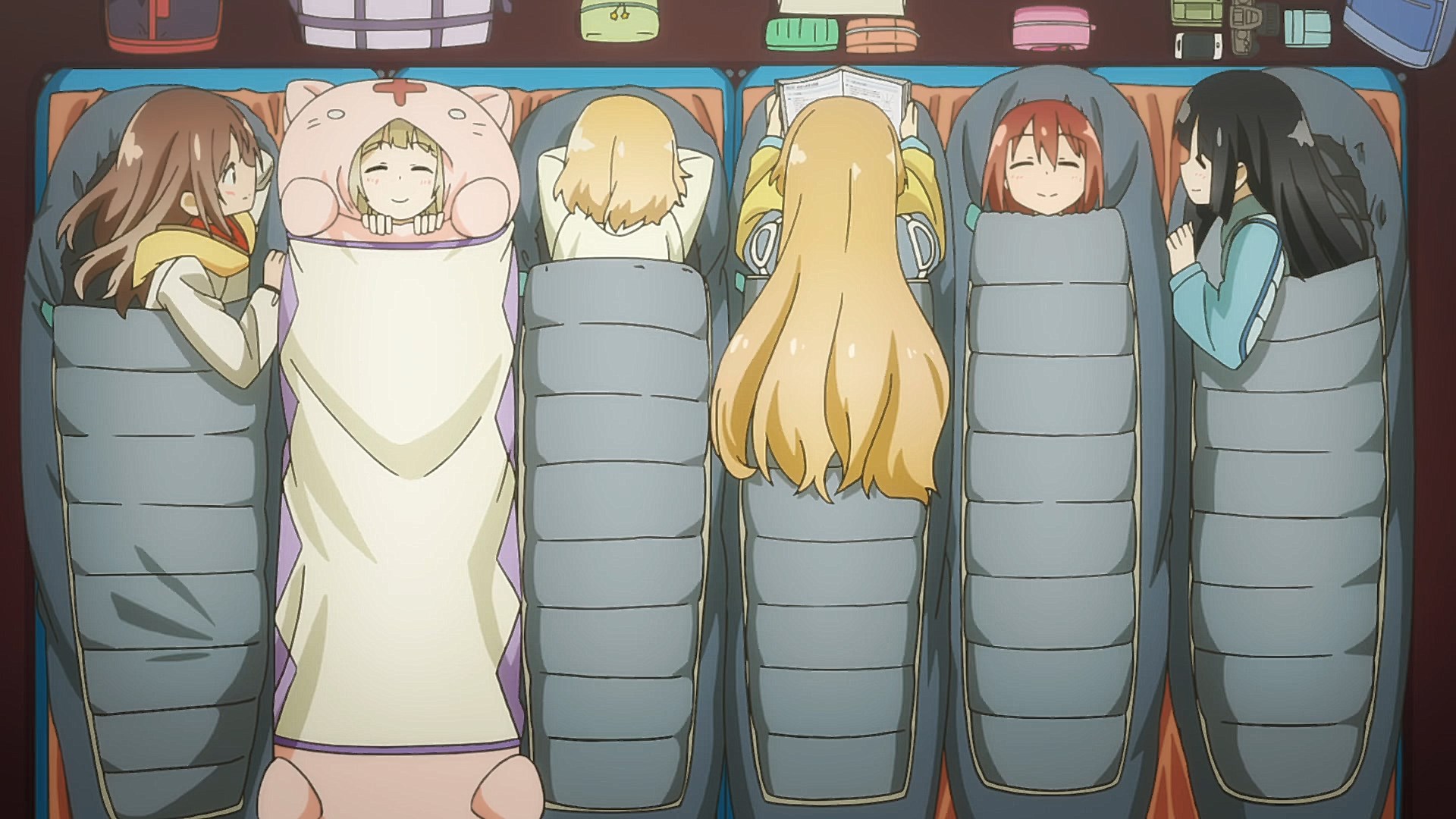 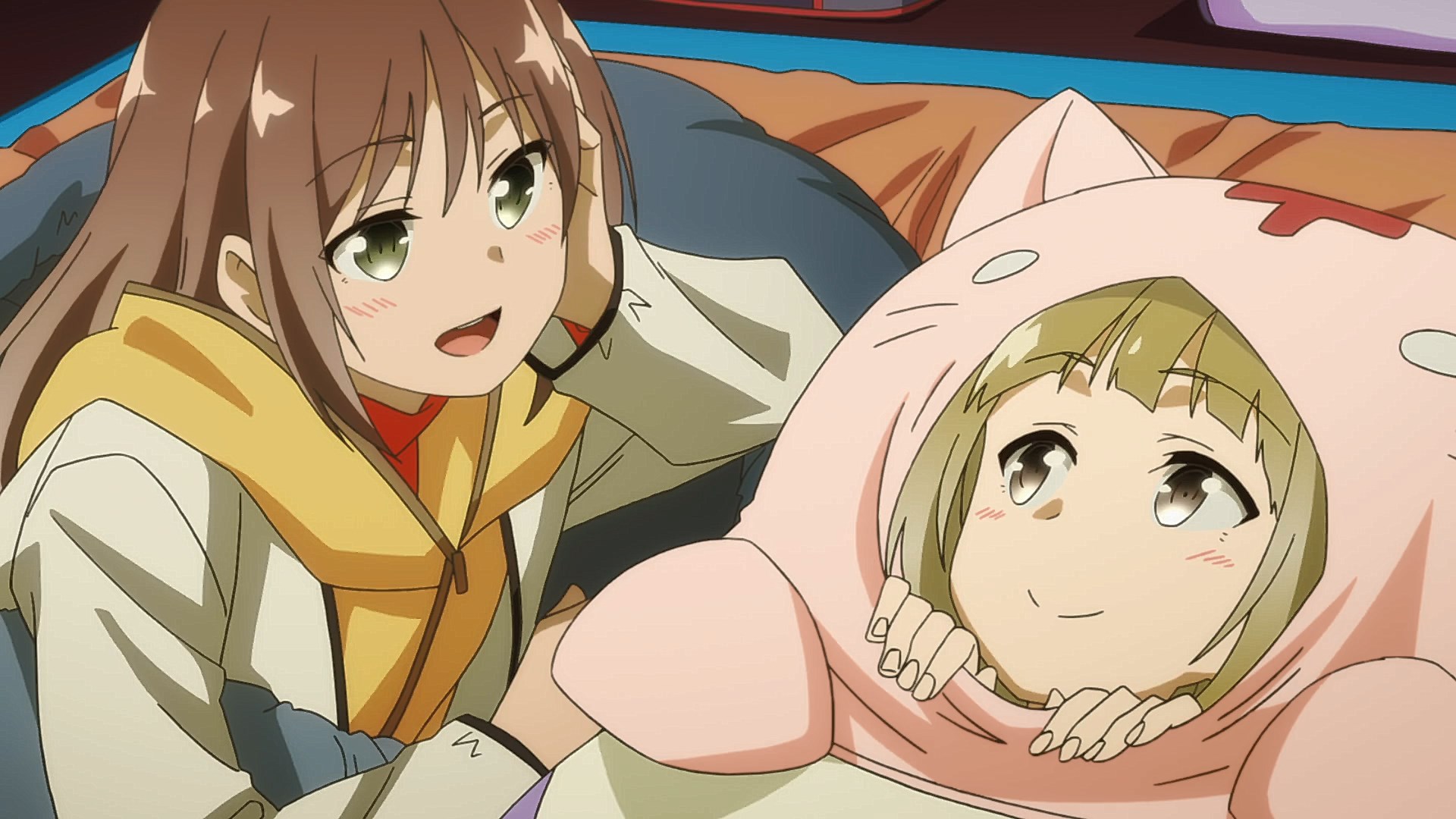 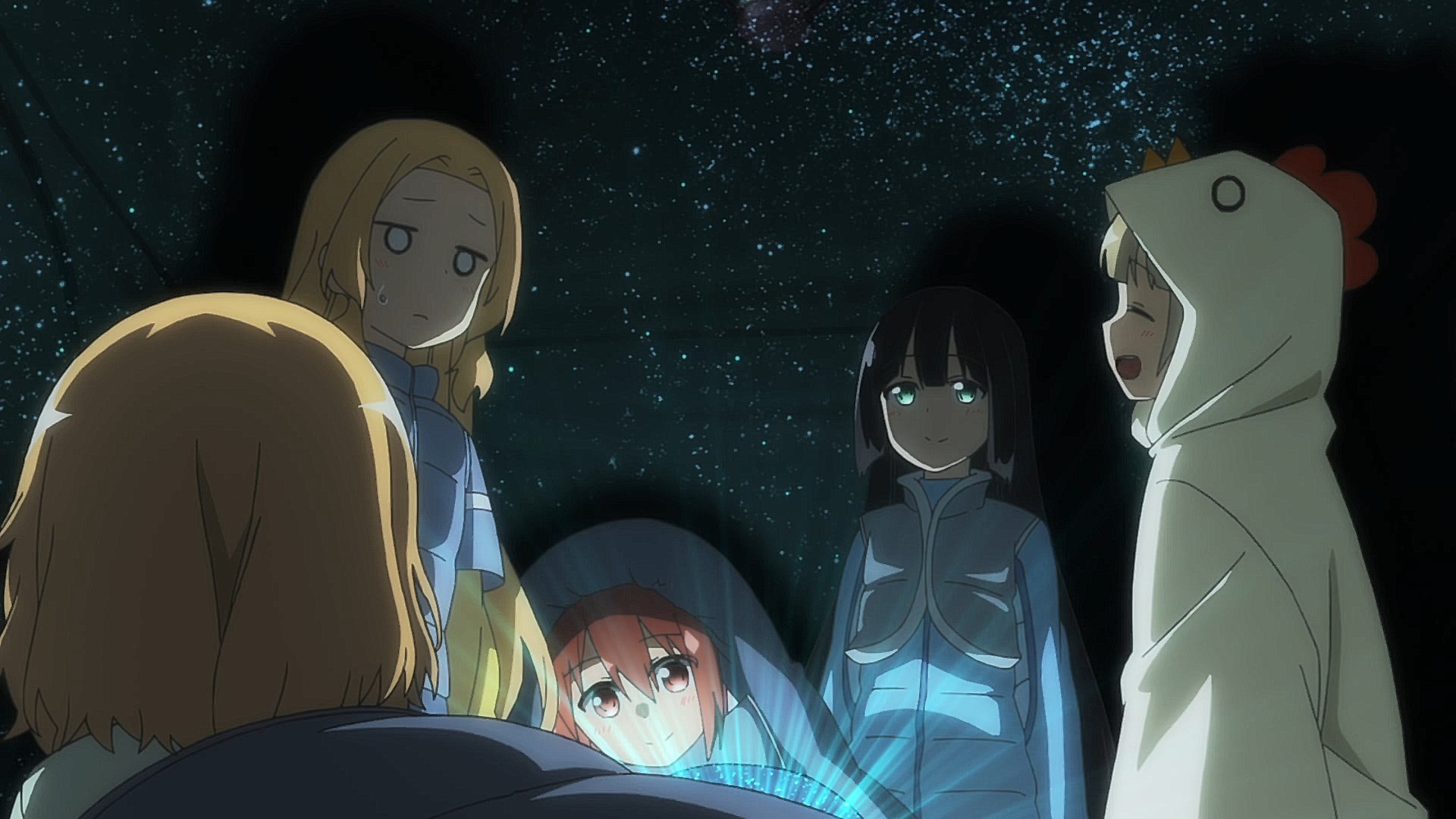 The girls continue to dazzle us with their cuteness!​
What is more, since this was only an arc and not an entire season, we are not given enough episodes to connect with all the new girls due to time constraints. It is these time constraints that mean many of this cast are left underdeveloped. On the positive side we do learn a bit of background on Karin Miyoshi and gain a greater understanding on why she was initially so uptight and competitive with the Yuuki Yuuna gang. All things considered this arc was a mixed bag and my wish was for more time to be given as by the time I grew attached to the characters; it was off to the next arc! 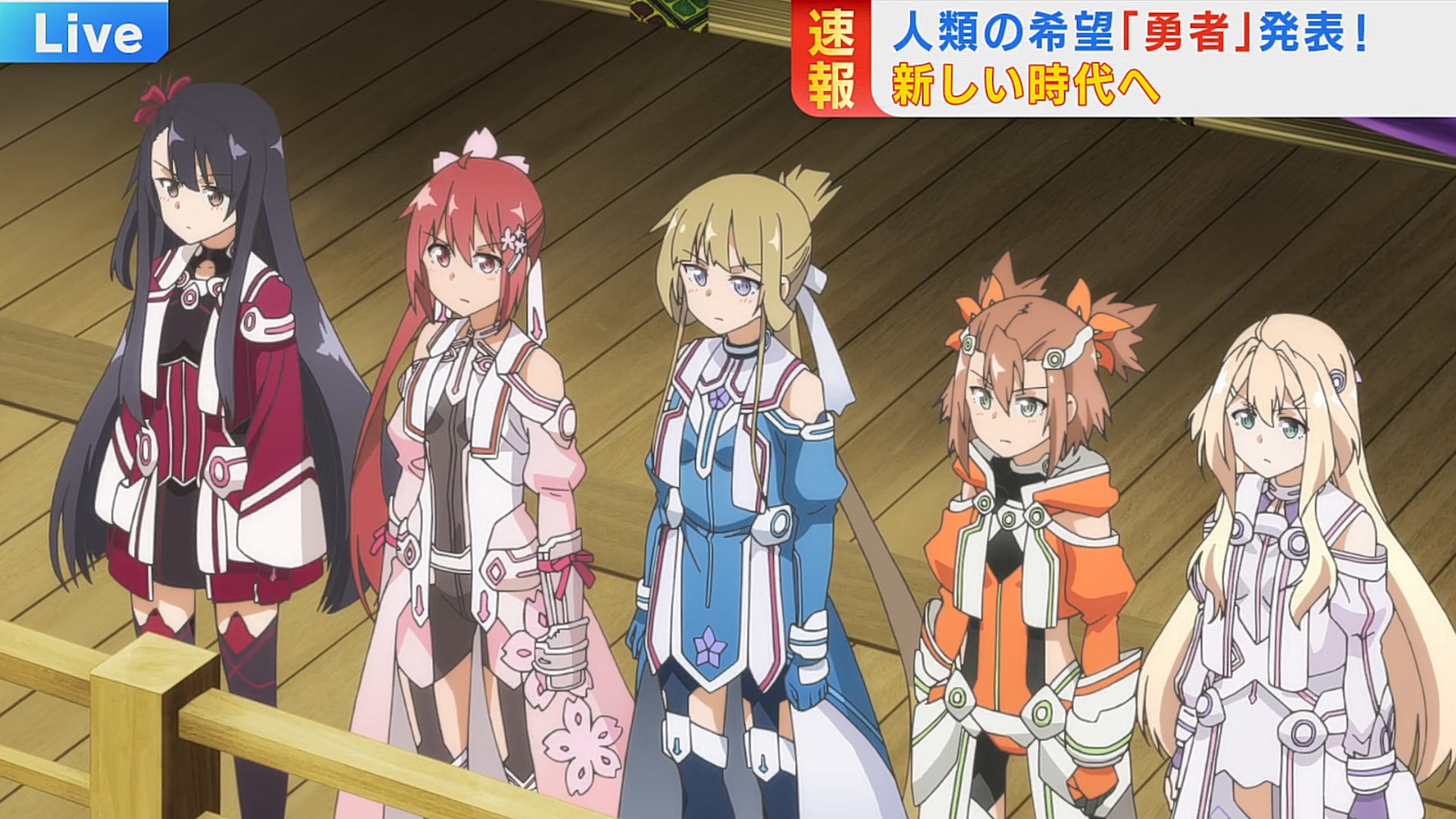 In this second arc we take a deep dive to the past in what is essentially a prequel arc as we go back right to the beginning of the Yuuki Yuuna universe. If you thought the first arc was rushed then things get taken to another level as we are introduced to yet more characters. Again, this arc suffers from similar issues to what occurred previously only this time the problems are much more prominent due to the compressed timeframe used to convey events. Moreover, unlike the first story we gain less from this arc as the only real gain from adding this arc is a little background on why the final big fight had to happen.

After those arcs are covered all the narrative from previous series (and characters) converge leading to the big moment. Now this is the moment when newcomers or veterans’ opinions are likely to diverge massively. For veterans of the franchise the final climax will likely go down poorly as it is essentially a recap of the Hero chapter with many scenes even recycled. It was a lazy shortcut and will make those long-lasting fans feel robbed but if you never watched the Hero Chapter or merely forgotten it then this climax will play out better for you. After this we get an epilogue that covers events after the big fight. This was better as we got to see many of the girls after everything was said and done but, if I am going to be honest, it was not enough to fully redeem the various shortcomings of the series.

If you have seen previous iterations of Yuuki Yuuna then you know what to expect as the standard here is largely the same. The vibrant coloured battle scenes return and like before there is some CGI that, while a little glaring, is not too offensive. Unlike other seasons there are no transformations sequences which could be a disappointment if you love magical girl series for that sort of thing. The Hero units deployed are less flamboyant so don’t expect advances there but on a more positive note we get the sentinel units that add a new flavour to the franchise. I wouldn’t call it the best thing ever but the action scenes played here was decent and different to what we saw before.

Animation in the opening and ending sequences are of a higher quality though. In this regard they are almost equal although I did prefer the opening song "Ashita no Hanatachi" which did a good job of getting me in the mood for each episode. The ending song "Chiheisen no Mukou e" delivers a more calming effect to settle any nerves you may have had. Both songs are voiced by the seiyuus of the main Yuuki Yuuna gang with those being Haruka Terui, Suzuko Mimori, Yumi Uchida, Tomoyo Kurosawa, Juri Nagatsuma, and Kana Hanazawa. 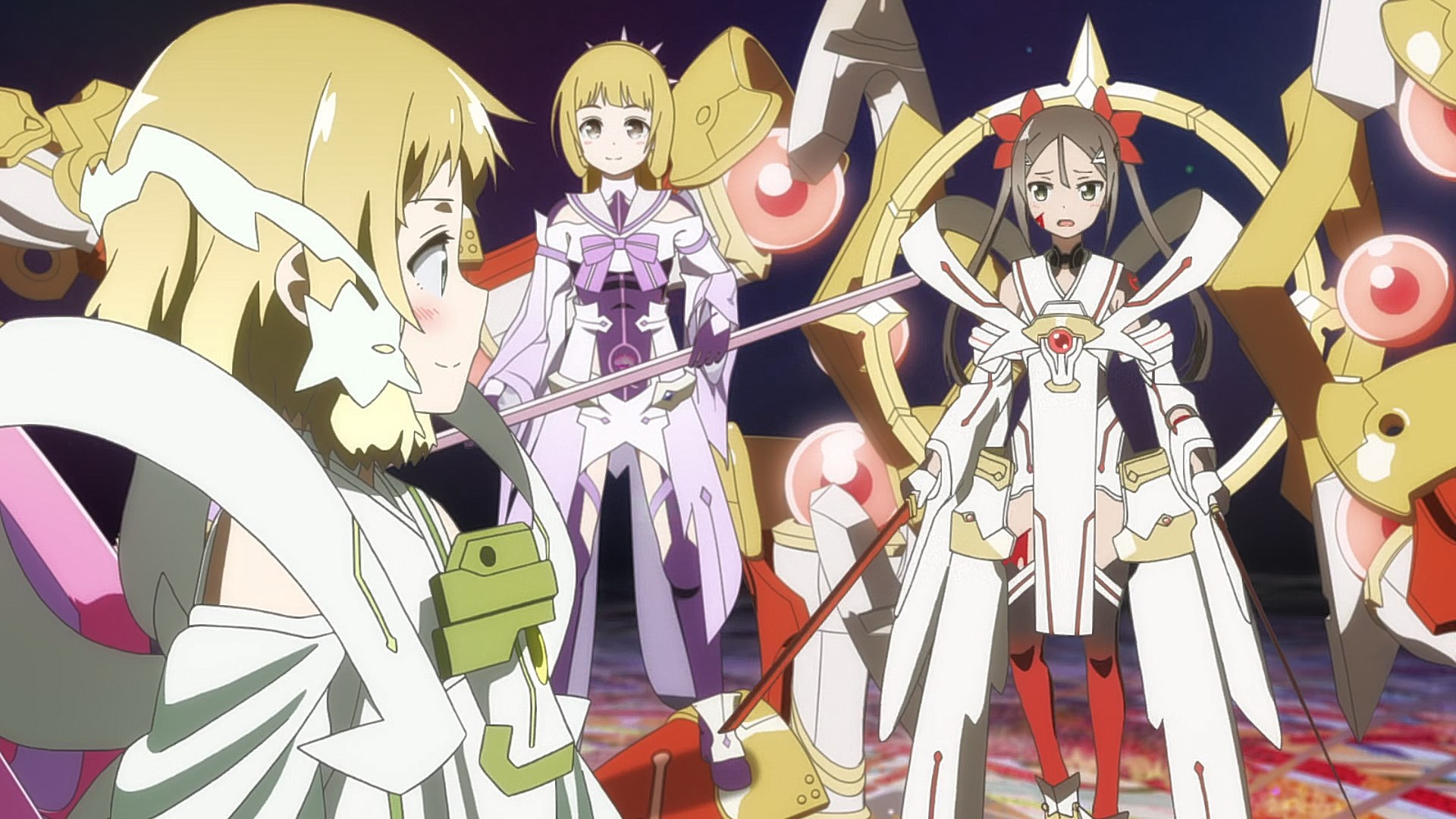 The big issue with the Mankai chapter is it attempts too many things in too short a time frame. If the arcs were split into actual separate seasons, the stories told would have been far more enjoyable. As it is the way this season has been constructed means it is a confusing series to follow as not only are there multiple storylines to follow but the number of characters introduced is quite staggering. The fact some of these girls looked very alike only added to this confusion.

It is these multiple storylines and new cast that means not enough development is given for either the story or characters to progress adequately. It is this rushing and lack of development and cohesion that left me getting a sense this was just a rushed job, or worse, a money grab. This feeling was only reinforced by an ending that is largely pulled straight from the Hero chapter. It just left me a bit deflated and whilst I did enjoy the final epilogue ending (maybe it is not the final ending?) it was a case of too little too late.

All things considered I feel the Mankai chapter may actually be more enjoyable for newcomers who have not been spoiled but then again it just makes the learning curve even steeper. What I can say with more certainty is this season was the weakest in the Yuuki Yuuna franchise.

Story 4 – The overriding problem Mankai chapter suffered from was pacing. By sticking two substantial arcs in one season we got a rushed job. If more time was devoted to each arc, then the impact these stories had would have been greater. This is especially the case with the second "prequel arc" when not nearly enough time was given. The biggest sin is left at the end though as the climax of the show is simply lifted straight out of the Hero chapter. If you watched that then any sense of tension would be lost.

Character 6 – The girls (even the new ones) are all likeable but due to the sheer number of characters introduced most are covered in the most cursory manner. Another unfortunate effect is just as we got attached to a given cast it was off to the next part of the story. Plus, if you liked the main Yuuki Yuuna cast then the screentime they get is considerably less than before which could be a bummer also. Still, there are various quality interactions to keep viewers engaged and there are a lot of girls you can root behind.

Animation/music 7 – Solid and consistent. If you saw the previous seasons then you know what to expect. CGI is deployed more often than the previous chapter but the notable omission is the transformation sequences. Opening and ending animation sequences are both good with enjoyable beats to boot.

Overall 5 – If truth be told this season was not needed. What is more, the Mankai chapter would have fared far better if instead of trying to advance the story narrative or even linking to the Hero chapter it focussed on telling side-stories or prequels as its sole ambition. By going down this route I could see real potential in delivering some really enjoyable stories. Alas this option was not taken and this show suffers from trying to do it all and failing in becoming too ambitious.

As such I could not recommend Mankai chapter to Yuuki Yuuna fans although ironically newcomers may get a bigger kick out of this. Be warned for if that is you then the learning curve is all the higher and you will need to understand the underlying stories and characters from scratch. It can be done but requires you to focus even harder. If you a die-hard magical girl lover then maybe this will be worth pursuing but for all other people better to leave this one alone. 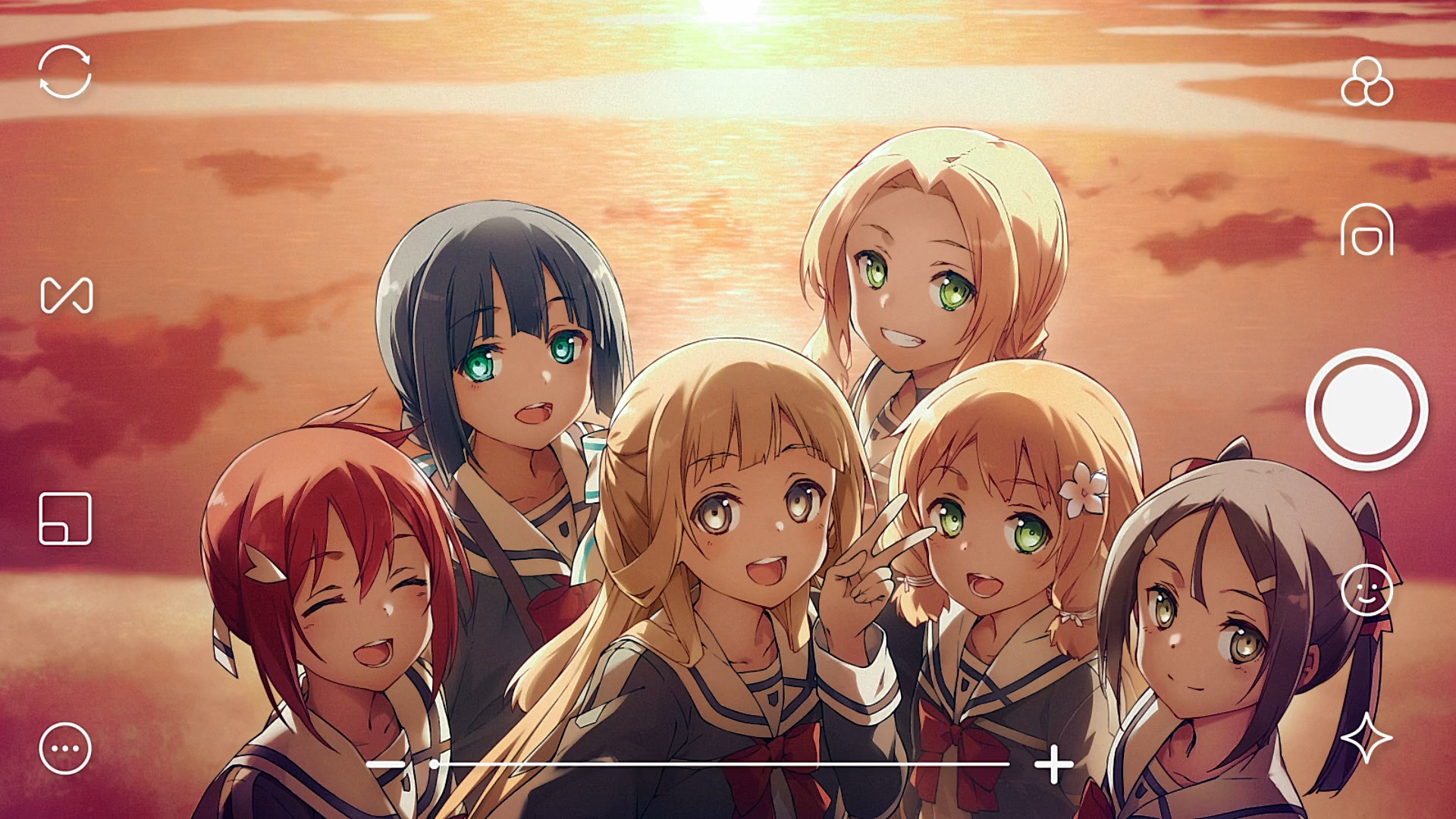 There are more girls than ever before in this latest Yuuki Yuuna season so what are you waiting for? Checking out the gallery! 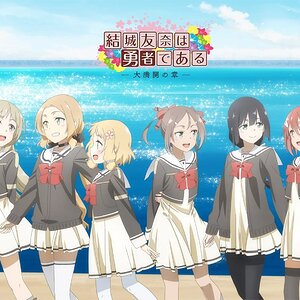 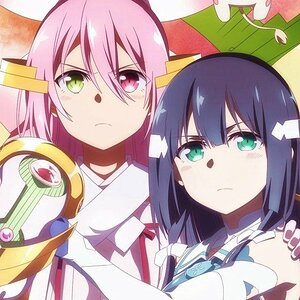 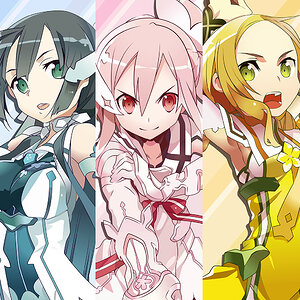 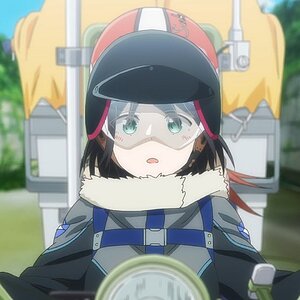 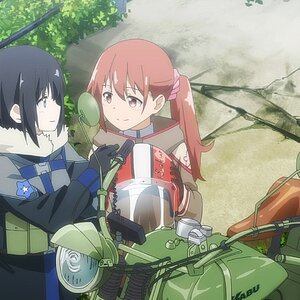 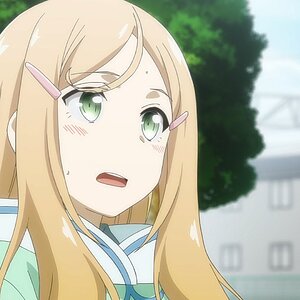 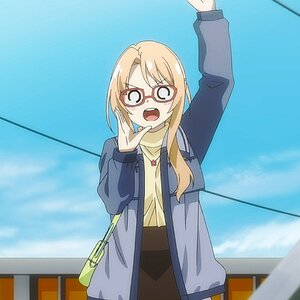 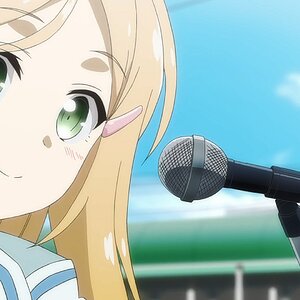 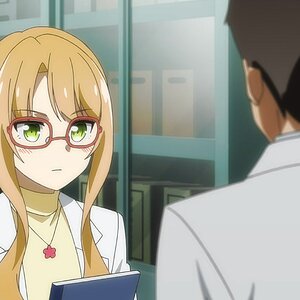 Yuuki Yunna is a hero! Season 4