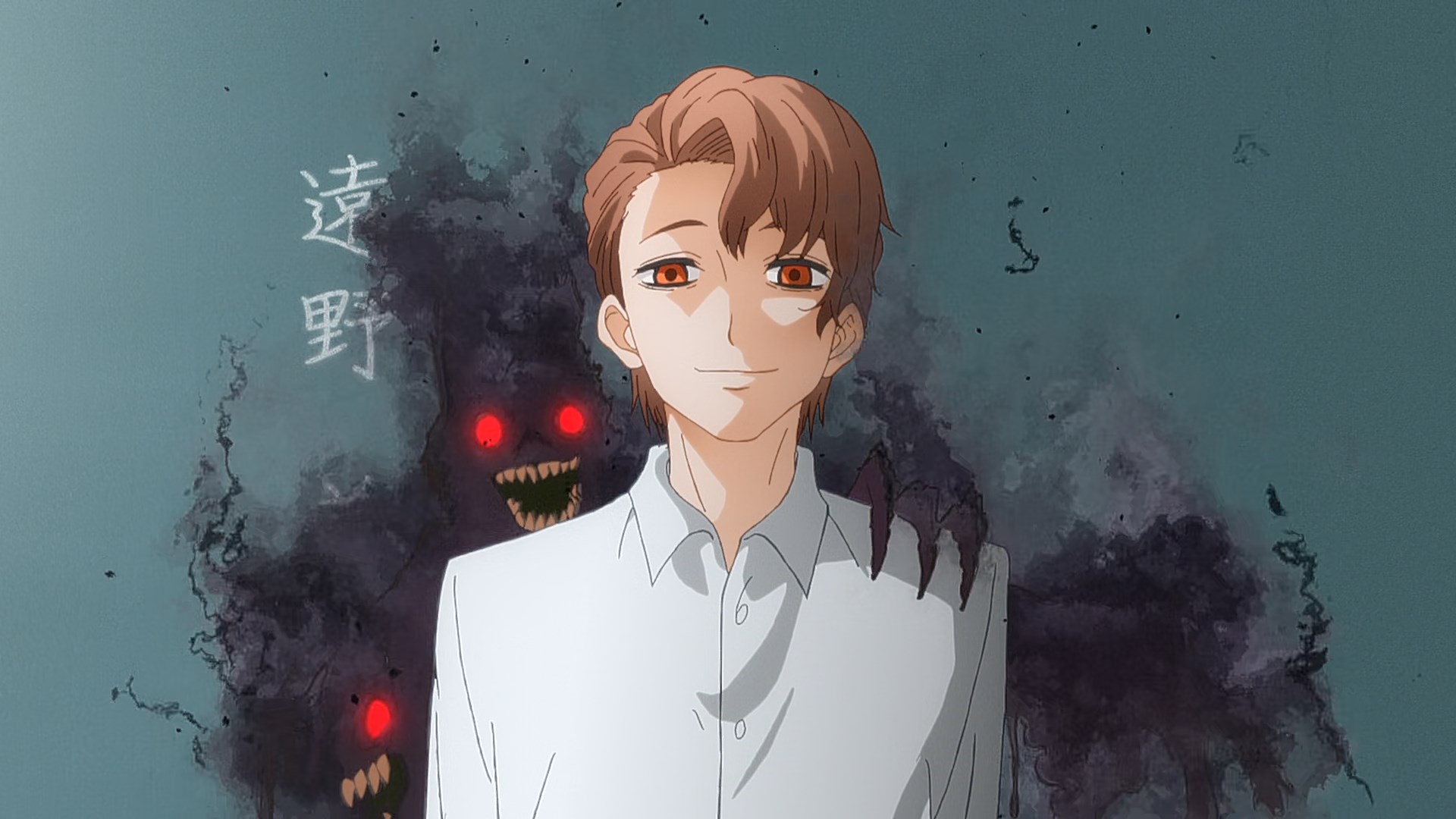 With the teacher off on maternity leave the replacement is the man Miko met in the park! He introduces himself as Zen Toono. Miko is immediately frightened and can see many evil spirits emanating from the man and even has difficulty looking at the bloke. No such problems for all the other girls who see him as a hottie! Meanwhile Hana seems to have totally forgotten their earlier encounter!

Hana’s ravenous hunger leads them to the school store where she grabs a bite to eat. Her appetite is insatiable and even Miko comments on it. Taking her spoils back to class Hana is at a loss when it comes to remembering when she saw the man. Hana’s forgetfulness makes Miko think that even the teacher couldn’t remember their earlier encounter either. Her moments reflection is quickly disrupted as she sees Zen walking through the hallway with spirts seeming to react to his every move.

Scared witless Miko runs off into the toilets almost breathless with worry! She tries to regain her composure only to hear some footsteps slowly get closer. Fearful, she ducks for a cubicle and locks herself in! It turns out to be a false alarm as it was only her classmates. But when looking at the actual toilet... She sees a guest up close and personal! This time the spirit has seen her reaction and she is frozen solid. After an agonising moment she tries to play coy looking at the empty toilet roll and heads for another cubicle when she opens the door however… 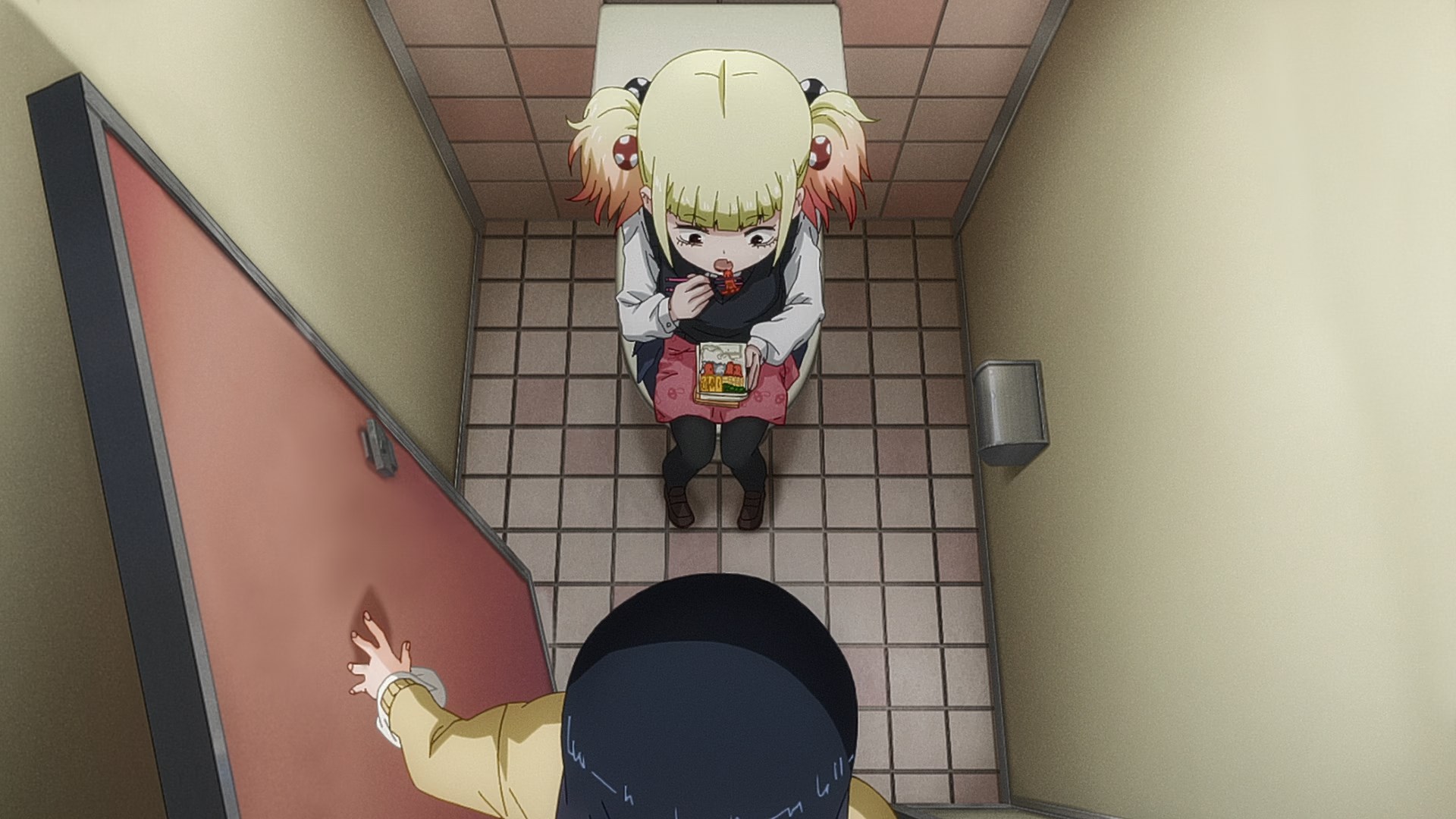 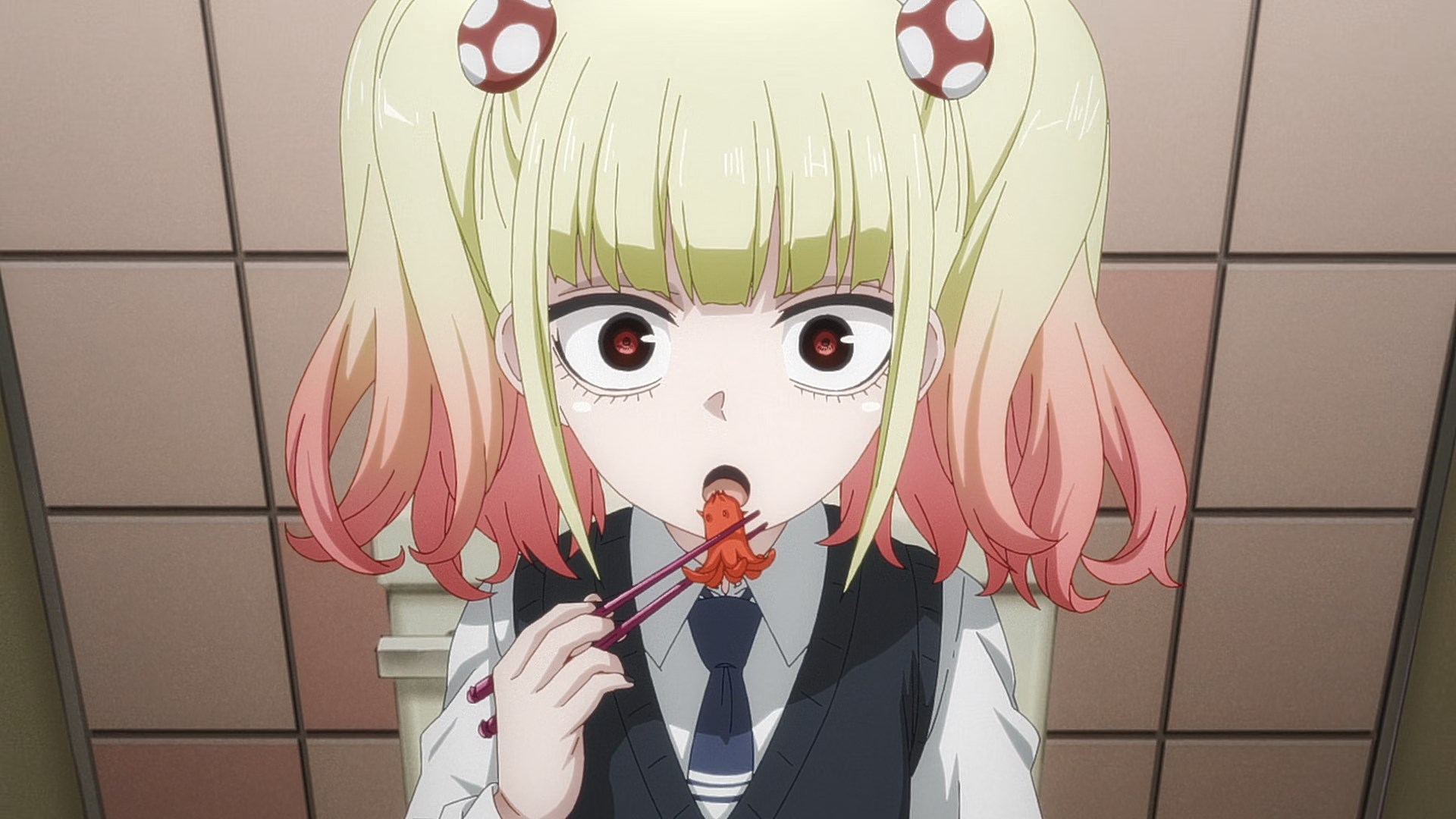 She finds Yulia nestled inside! Feeling sorry for her she invites her outside. The girls then take time out in the school courtyard. Miko vows not to get scared of future spirits as they are present all the time. She asks if Yulia always eats her lunches in the toilet and when she says yes Miko invites her to eat with them going forward. Bless Yulia as she feels touched over Miko and Hana’s offer! It is at this moment when Miko’s mettle is tested with yet another spirit who comes to say peekaboo and reduces her to tears!

I don’t know how Miko can punish herself like this but the girls decide to take on a haunted house. Hana is immediately spooked but vows to take this challenge as anyone who finishes can claim some yummy donuts! Her fears are still real though so she clings onto Miko for dear life. Yulia meanwhile is unfazed and Miko believes this to be an opportunity to woman up! The girls take the plunge and step into this dark scary house! It is not long before Hana is sweating buckets and is teetering on the edge as she clings to Miko for dear life! This is in stark contrast to Yulia who seems impervious to the scares and is taking it as one big joke. The joke is on her though as the next big fiend takes a swing at her! 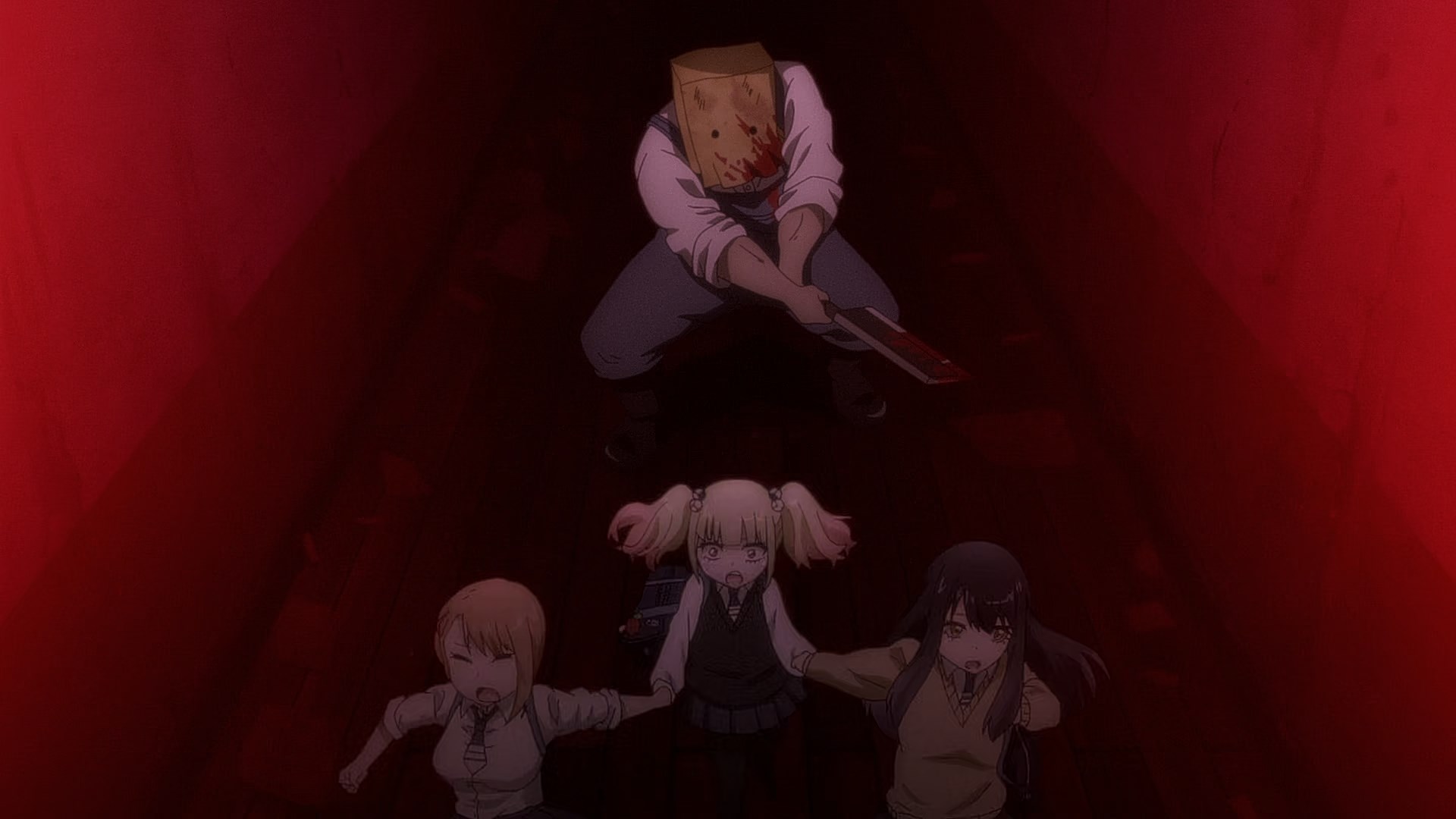 Taking a breather, a little spider greets Hana and this sets her off as she jumps into Miko’s arms. Miko tries to calm her by saying she managed the abandoned building. This statement from Miko startles Yulia who feels that building was impossible to transverse for those gifted with the vision. Her mind races and she envisions that Miko used Hana’s mad aura to exorcise the whole building and is stunned!

Hana is at the brink of giving up and calling it a day but her desire to get donuts is strong so she perseveres. At this point even Yulia is beginning to feel uneasy but when the previous axe wielder shows himself the girls leg it! The most obvious thing then dawns on Miko… She can scream! She doesn’t have to hide her fear and runs around screaming in delight! 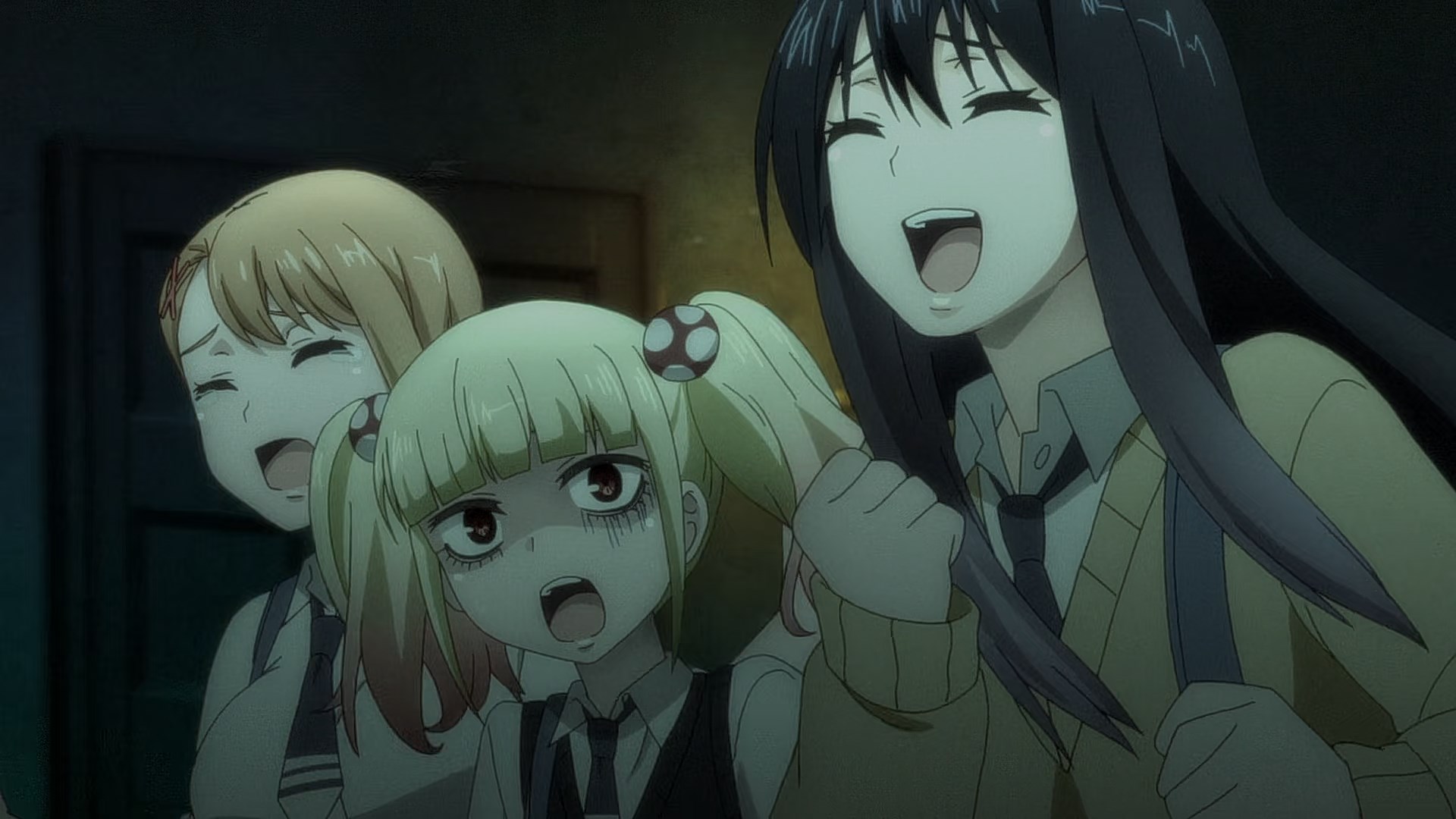 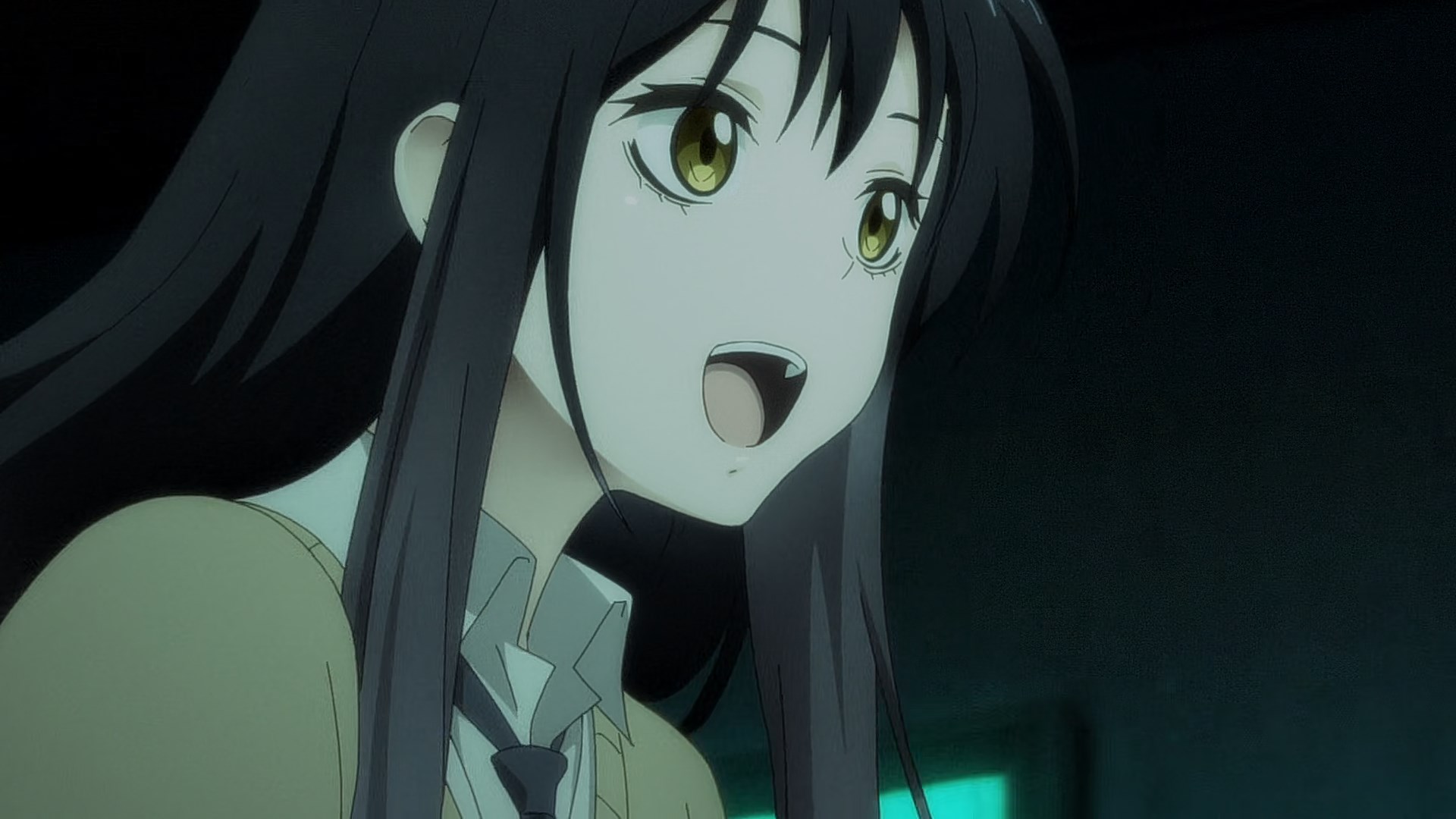 The girls finally get the cursed stamps and can claim those hard-earned donuts. Miko is relieved and lets out a wee scream with the “guest” sitting by the stamp booth only to realise that is an actual spirit! To mask her mistake, she suggests they head for the exits but then all the monsters give chase and it is another mad dash to the finish line. Miko, against all logic, stops and tells the whole lot to stop. The girls chastise Miko for her nativity and she continues to run once more. 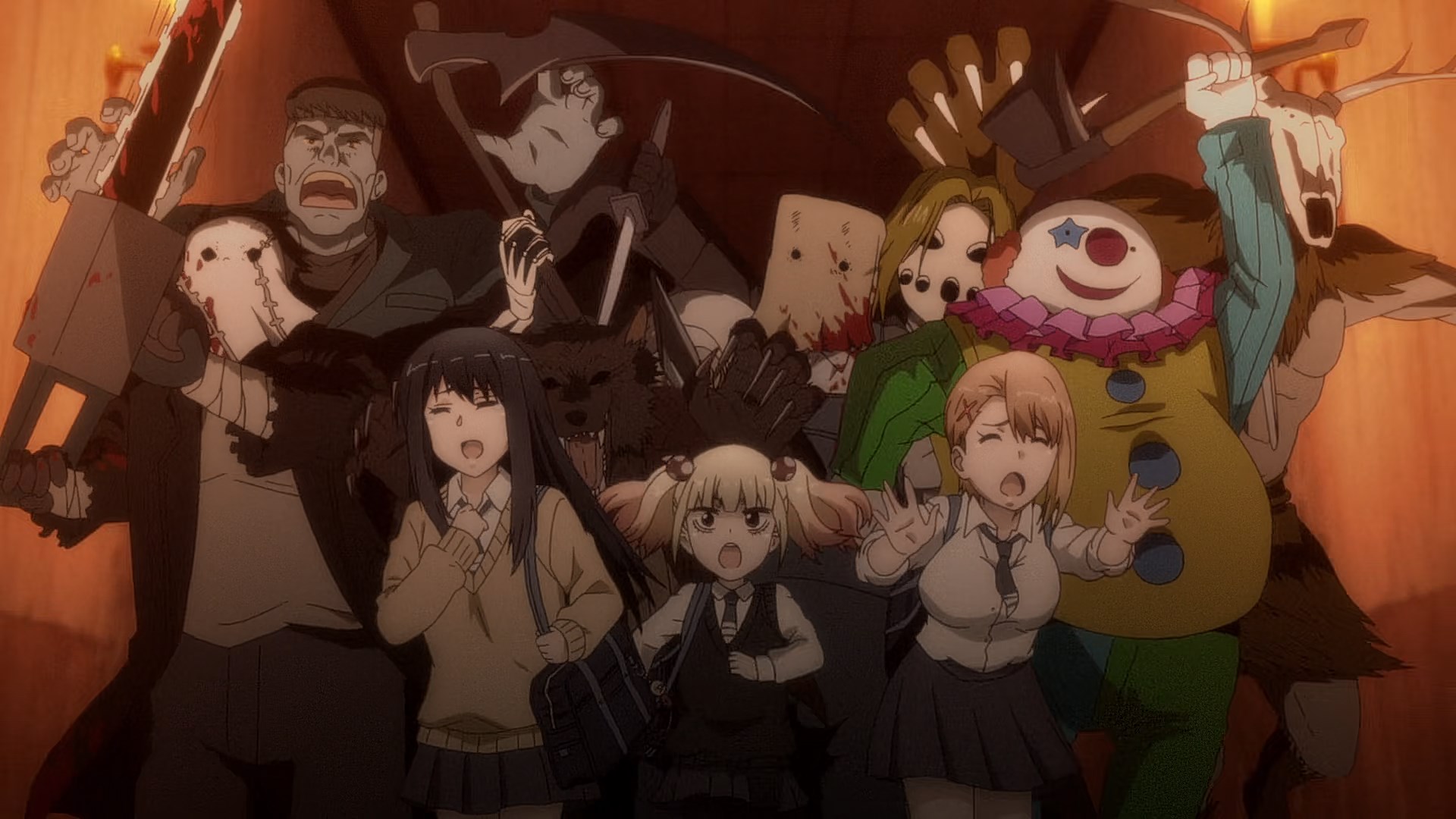 The trio finally get back to safety and Hana grabs the meaning of life, I mean donuts. Miko is also left satisfied as she saw this as an opportunity to confront her fears and asks if Yulia would be up for bigger haunted houses in the future. Yulia agrees thinking this is yet another challenge laid down by Miko! The girls walk back home and the main thing on Hana’s mind is on splitting the spoils of war. Miko ain’t interesting in the donuts and neither is Yulia who can only think of the godmother and her fortune telling powers. Speaking of the godmother she is toiling away in the field promising not to be a burden to her son and daughter-in-law. Will she make her grand appearance later on?

We are greeted by some lovely crows that seem to hover around Zen’s apartment. An old friendly granny knocks on his door offering him a lunch. She remarks that the crows are getting rather ravenous these days what with all the cats being gone… She then notices his bloody hand and he brushes it off as just a little cut from some broken glass. Yeah right! The guy killed all the cats in the apartments! 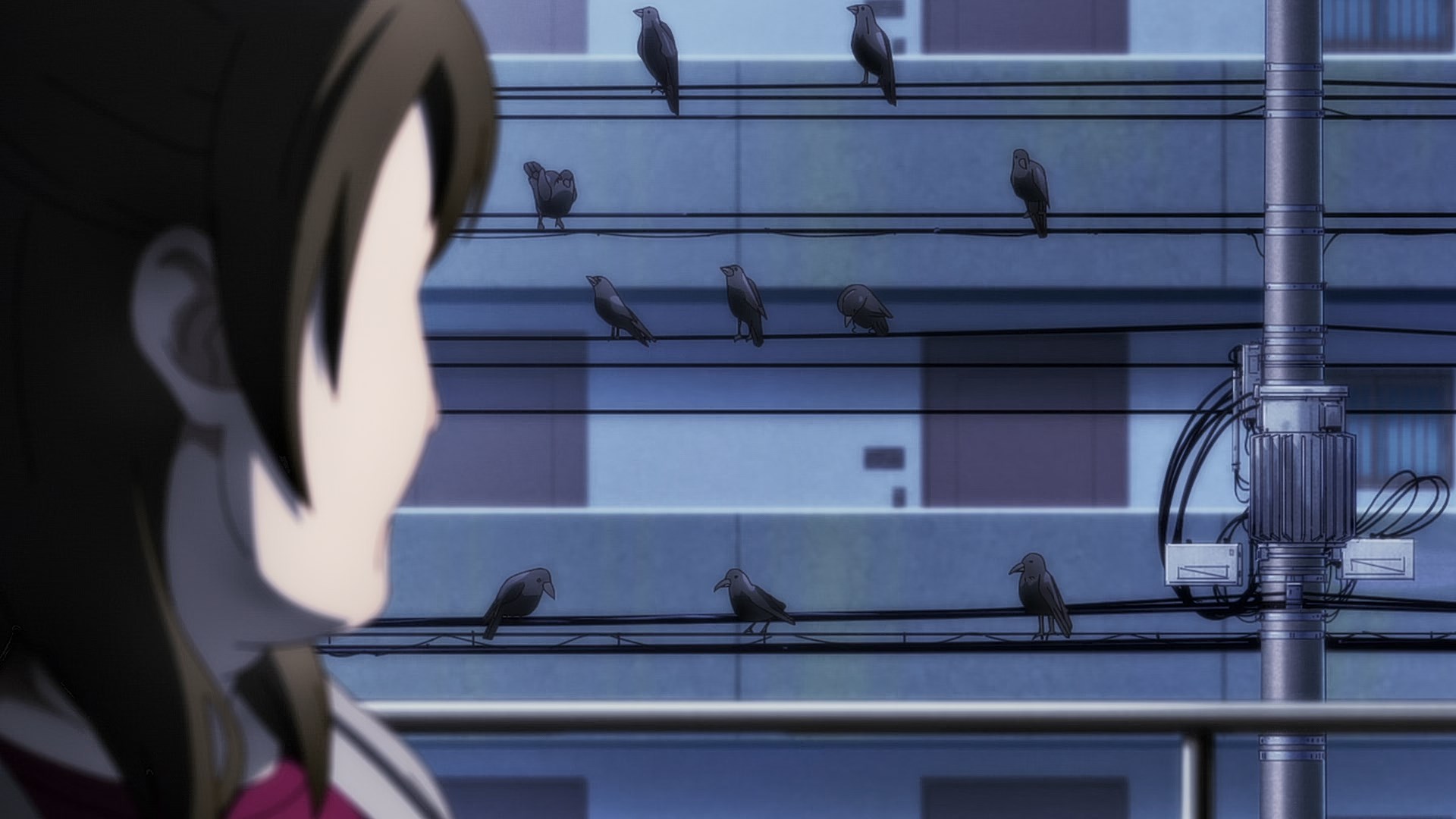 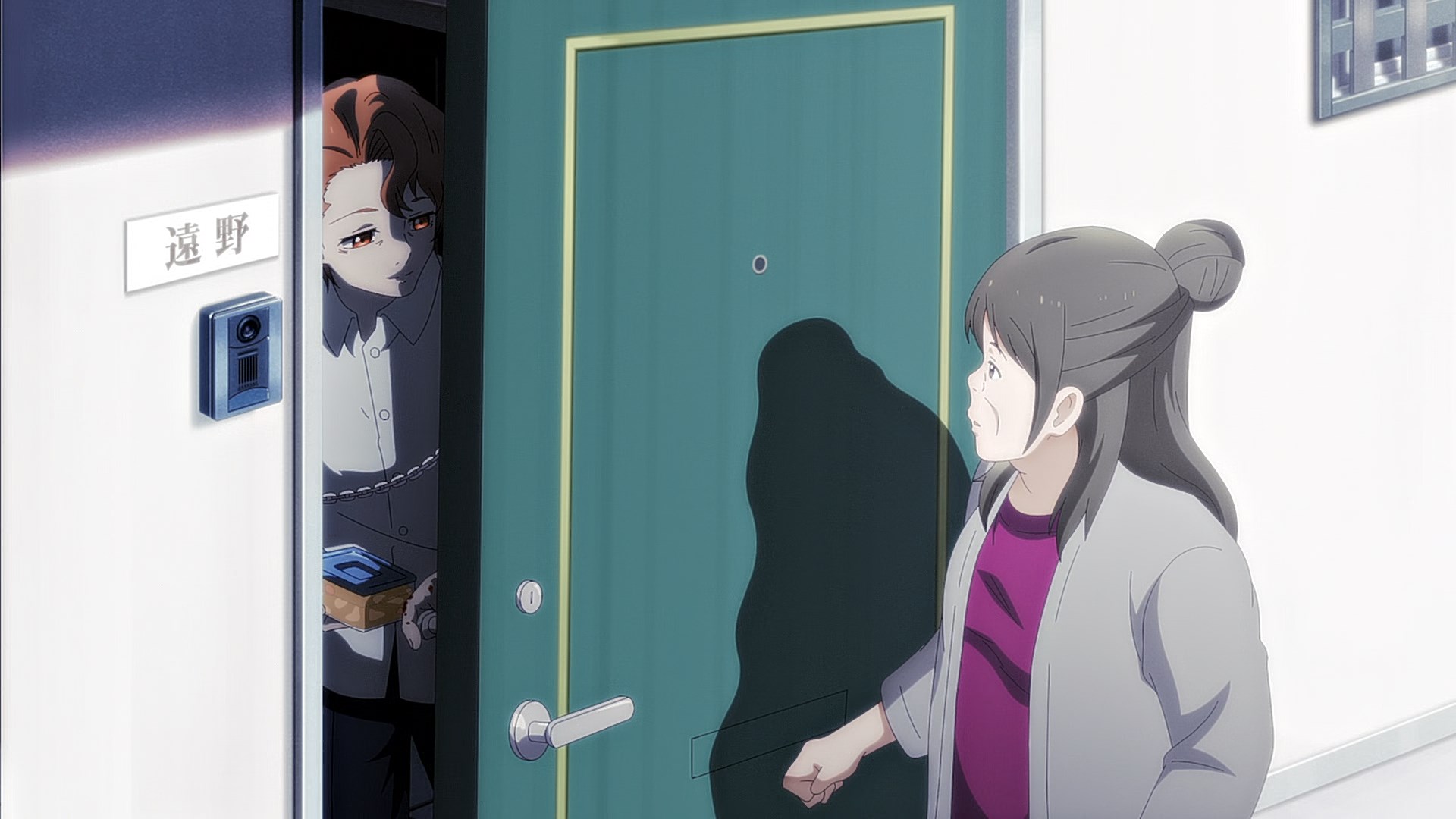 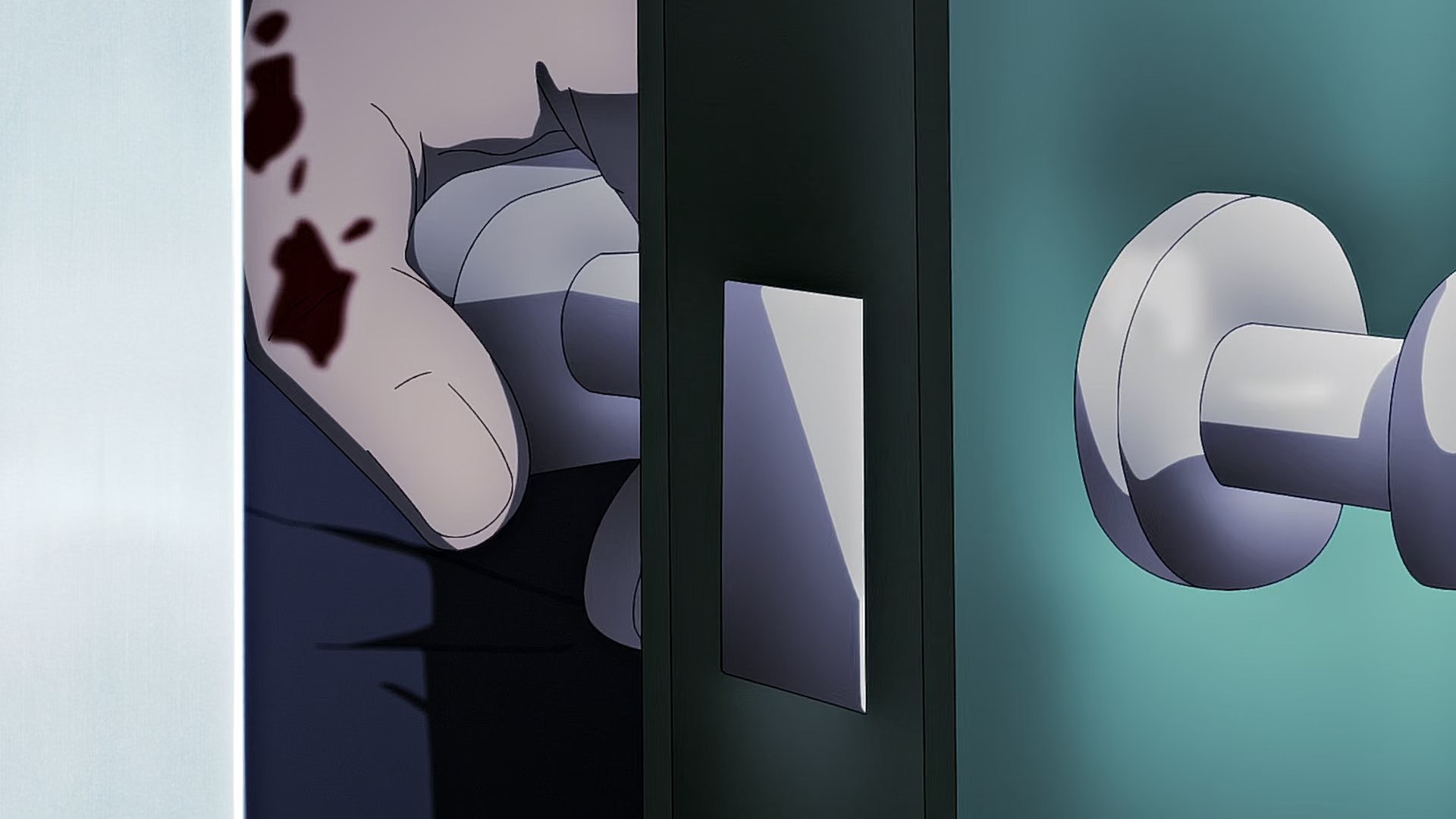 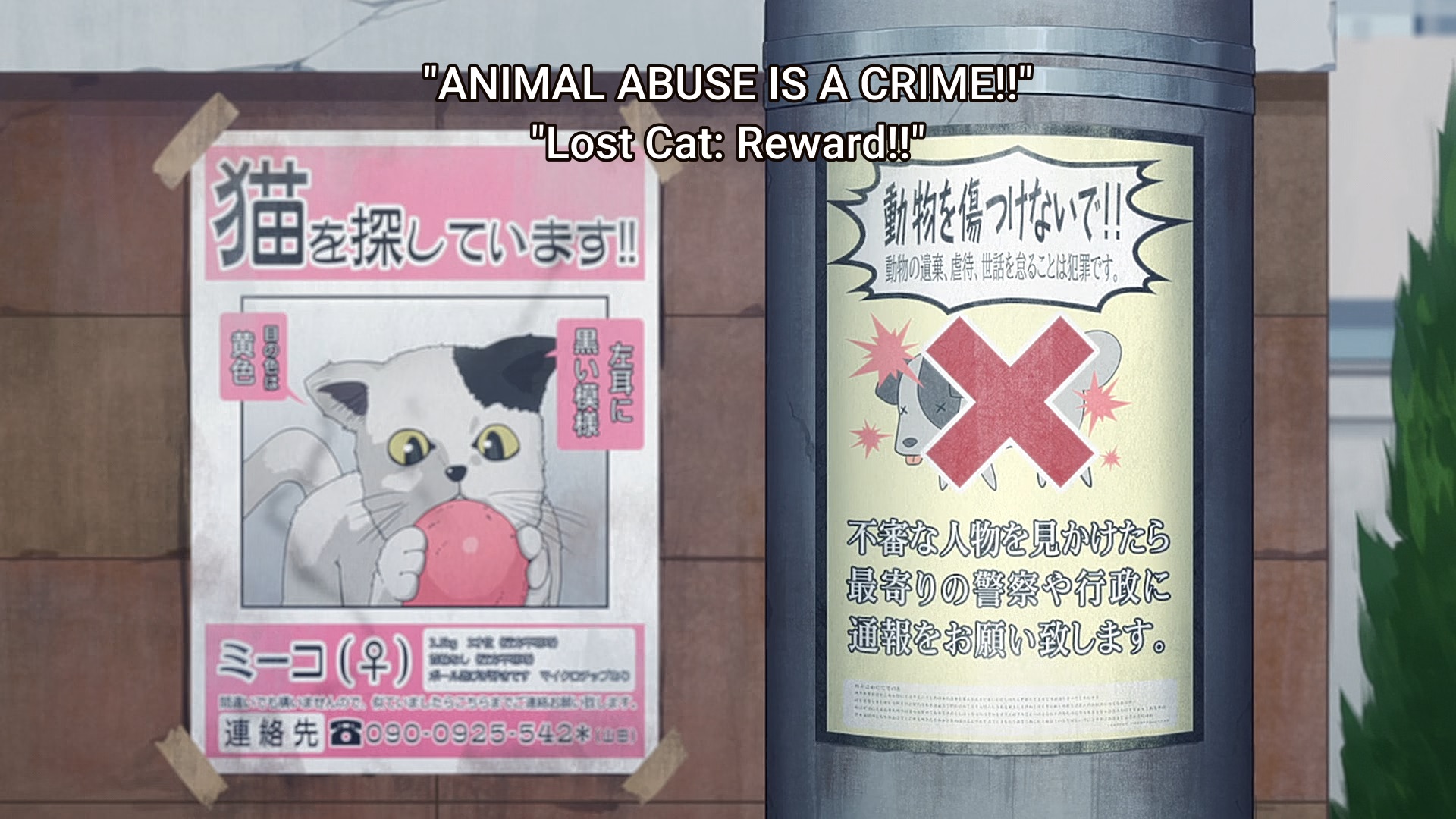 It is not only the crows that are hungry as we see Hana complaining of her mad hunger that is insatiable. Miko takes a pop at her “healthy appetite” and they do a few laps round the track but this moment of carefree bliss is cut short with yet another spirit. To calm her nerves Miko takes a breather and decides that running side by side with Hana is better than racing and she declares her love for her.

In class the teacher Zen seems incapable of remembering names as he gets the names of several pupils wrong. Is he too busy killing cats to remember? Miko looks around the room and notices this massive ghost. What is telling is the creature is asking others not to look at Zen but most startling is when the spirit leaps into Zen’s body! It takes Miko by surprise and she wonders if she would enlist the help of that axe wielding ghost she saw on the train… She dismisses that notion from head for being absurd but then Zen calls Miko out and this time actually remembers her name! Between a rock and a hard place struggles to hold her nerves. Her sense of unease goes up another level when both the ghost and Zen who inch closer and closer to Miko! 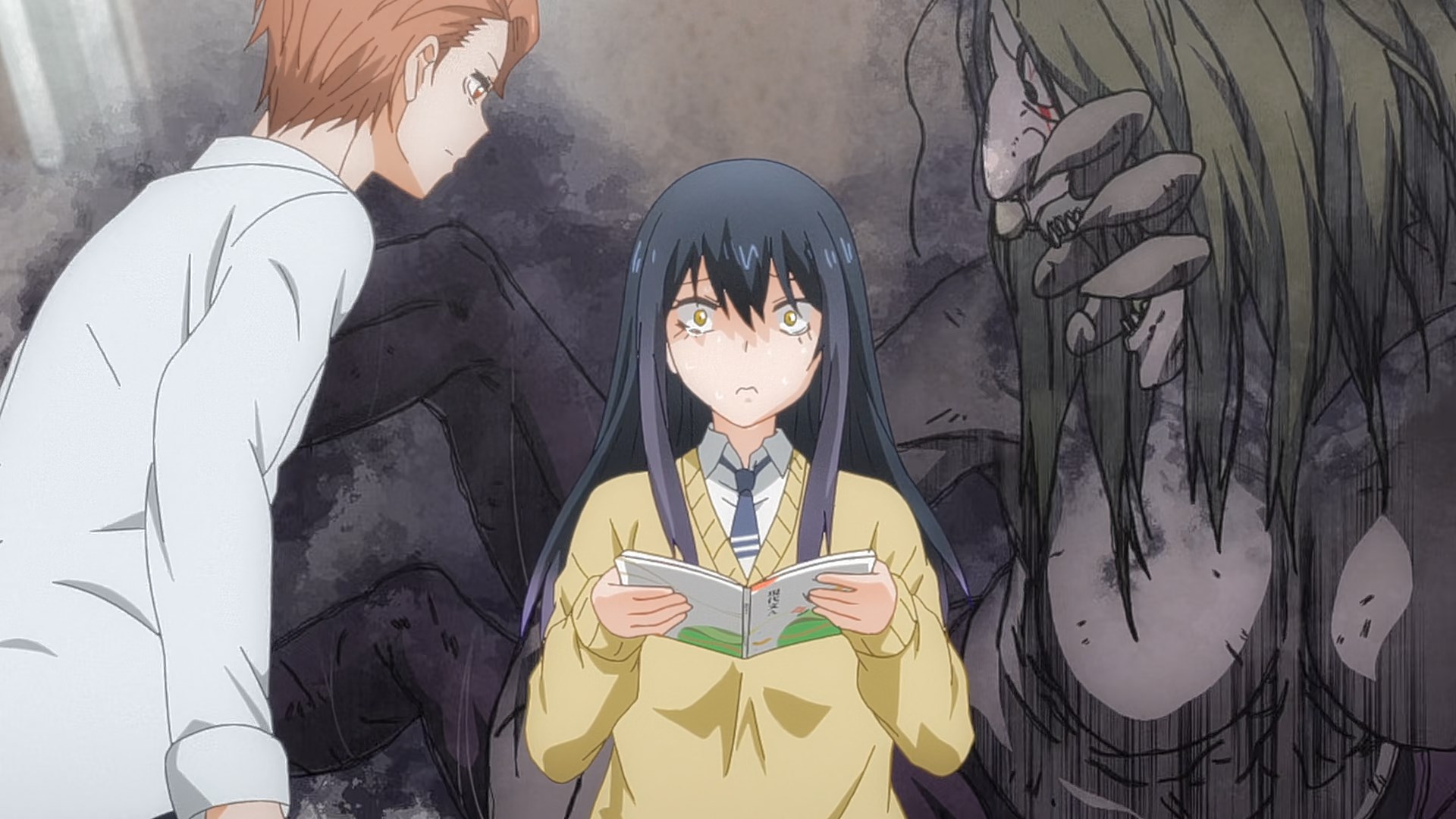 She is saved by the growls of Hana’s stomach who at this point is simply starving! Miko doesn’t let this opportunity slip by and grabs onto her lover and carries her out of the classroom so she can get some much-needed food. As the two walk through the hallway Yulia notices them walking through her classroom window. Concerned she follows suit and goes into nurse’s office to check on the girl but stutters when asking to see her friend! 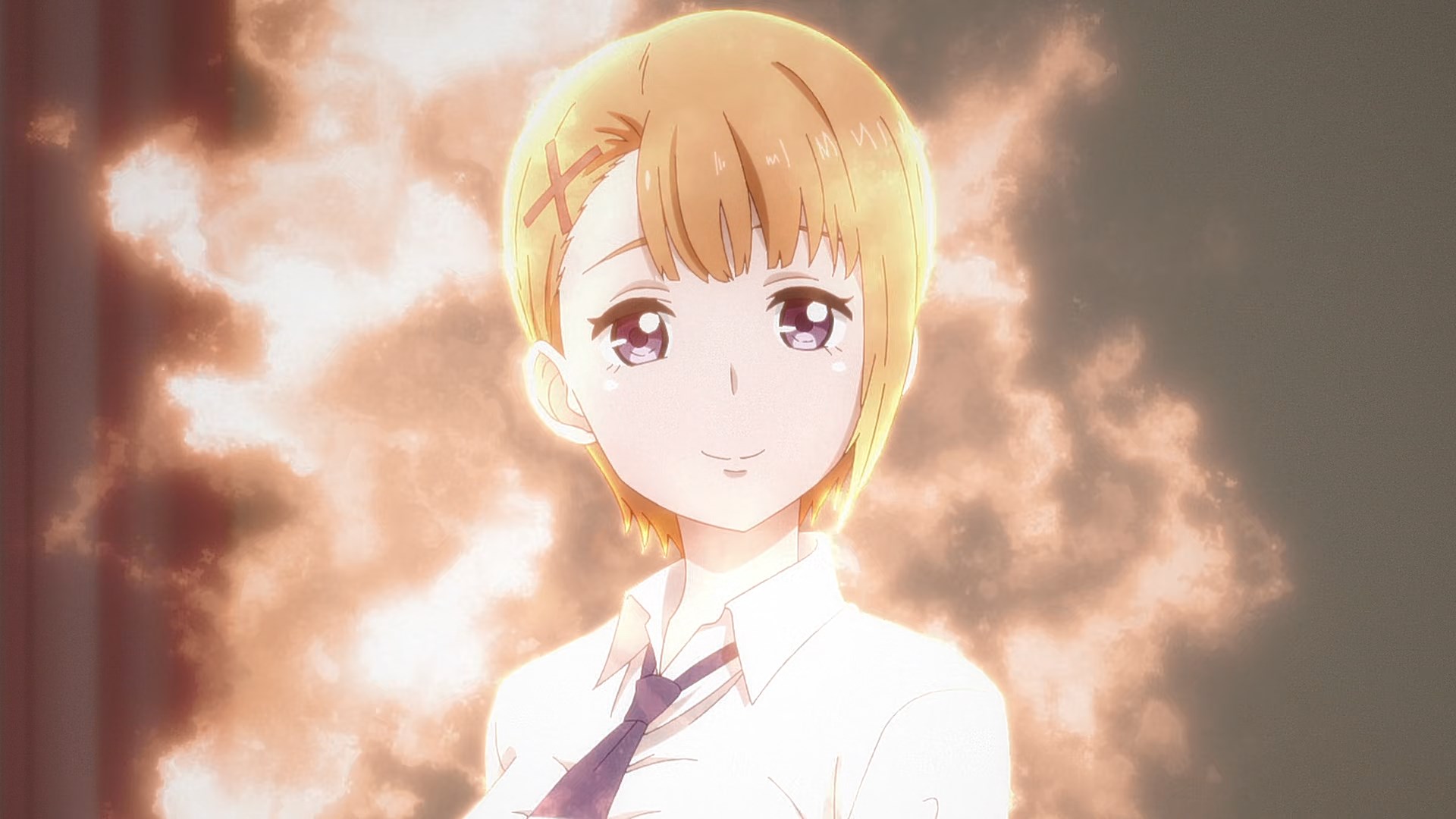 Opening the curtains, she sees both Miko and Hana. Yulia asks what the matter is and Hana says her hunger is off the charts because of missing second breakfast. Confused but still wishing to help Yulia offers some sweets which are snatched and eaten all in one swoop. As this happens the flaming aura surrounding Hana becomes visible once more. It is at this point that Yulia begins to understand Hana’s plight and says that even her life aura would be drained being around her teacher. This takes both Hana and Miko by complete surprise. Is it only Yulia who can see this aura?

Frightened she said too much, Yulia backtracks and says that her teacher’s low spirits are simply draining Hana’s calories. Miko meanwhile thinks about what Yulia just said and realises the effects of the teacher have a bigger impact on Hana than herself. Miko’s deep thinking is taken the wrong way as Yulia believes she is actually glaring at her latest blunder in spilling the beans! Miko realises her thinking face looks like a big scowl and apologies but when she asks Yulia for advice the girl runs fearing her life is in danger!

Hana grabs yet another bite and the girls sit down admiring the sights and sounds. Miko takes this as a moment to reflect on the time they have spent together. She ponders about how she cannot see Hana’s life force and thinks this aura would explain her crazy appetite. She lets her guard down and waves at a friendly child saying bye but then… 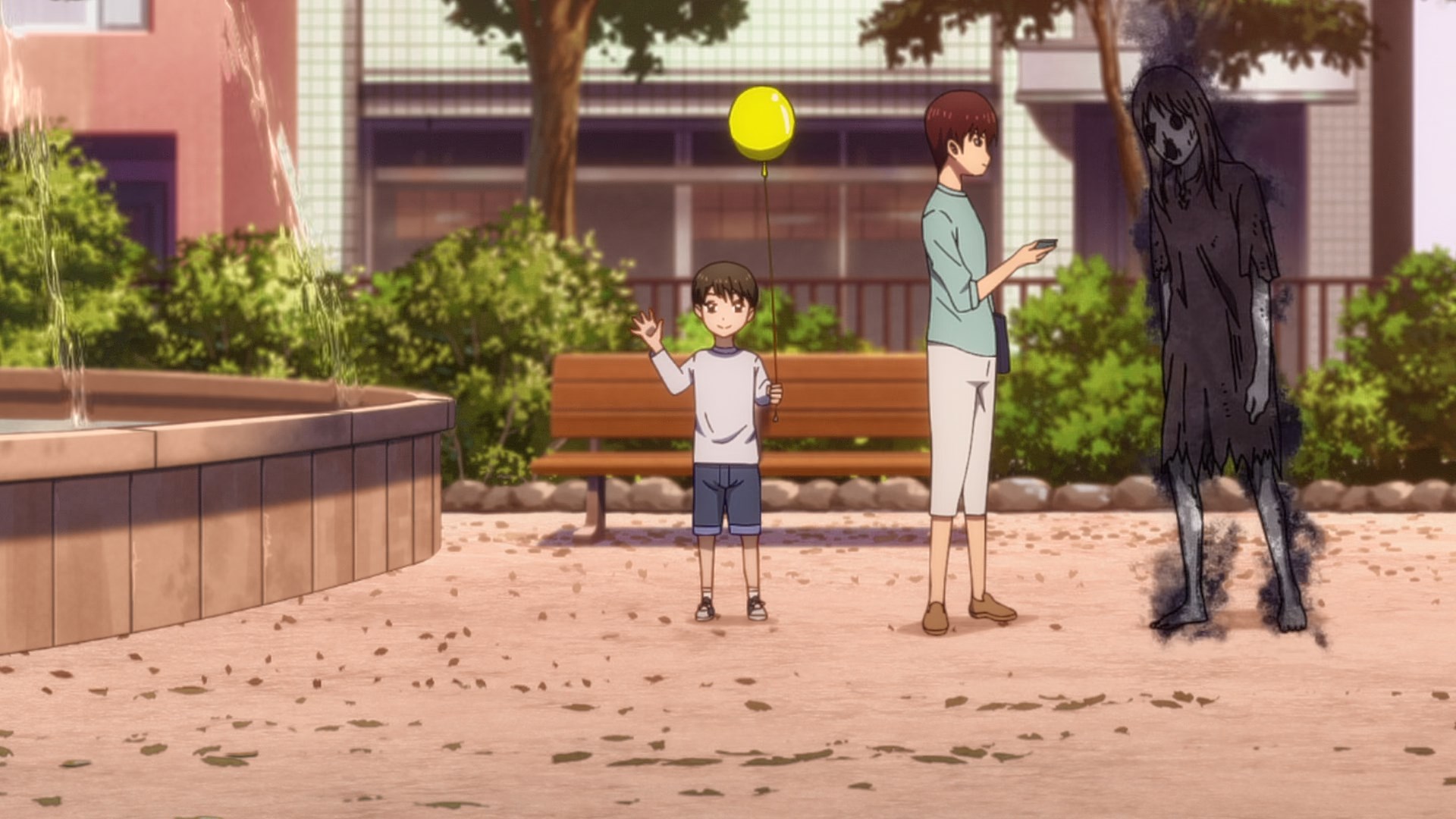 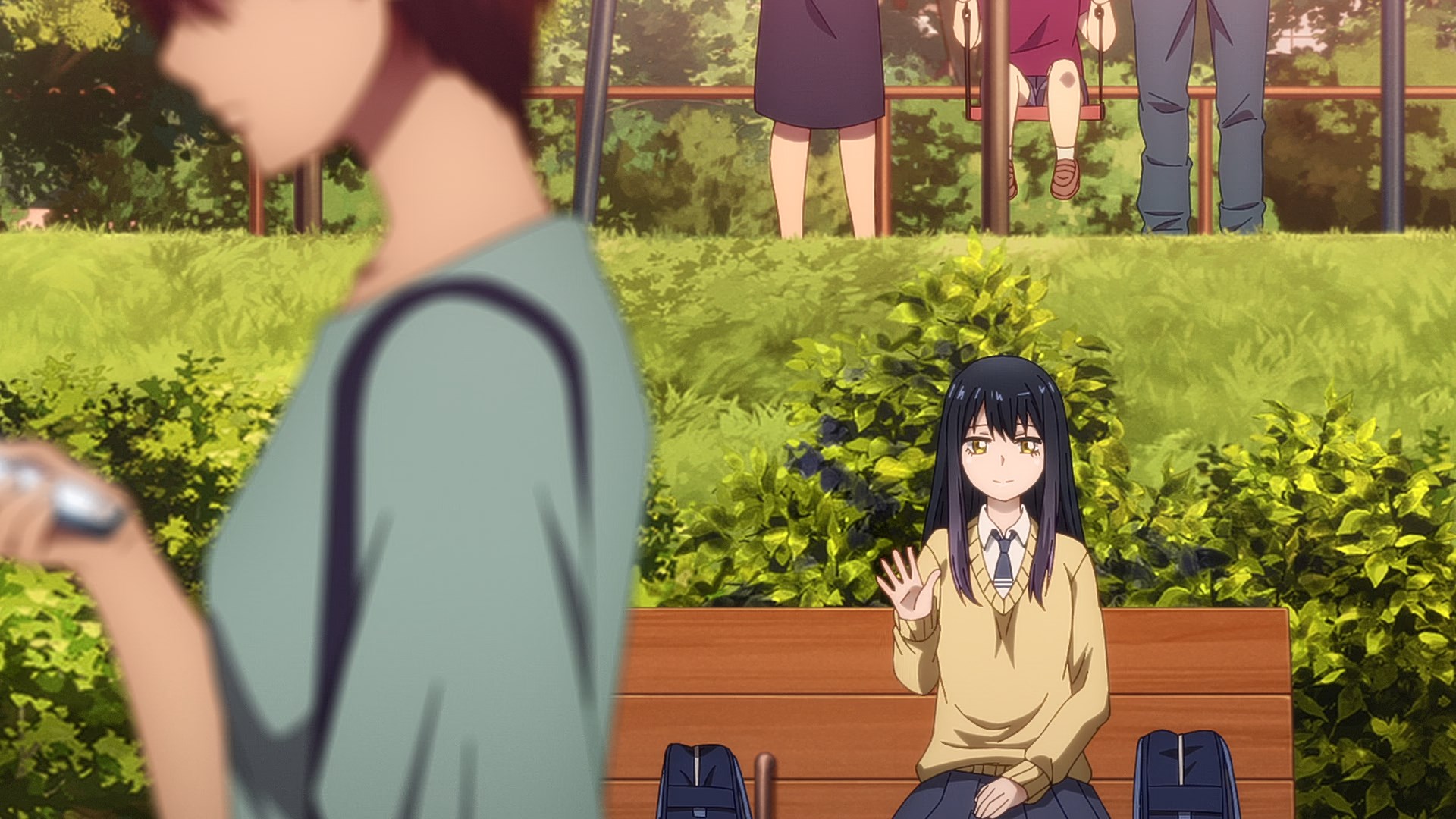 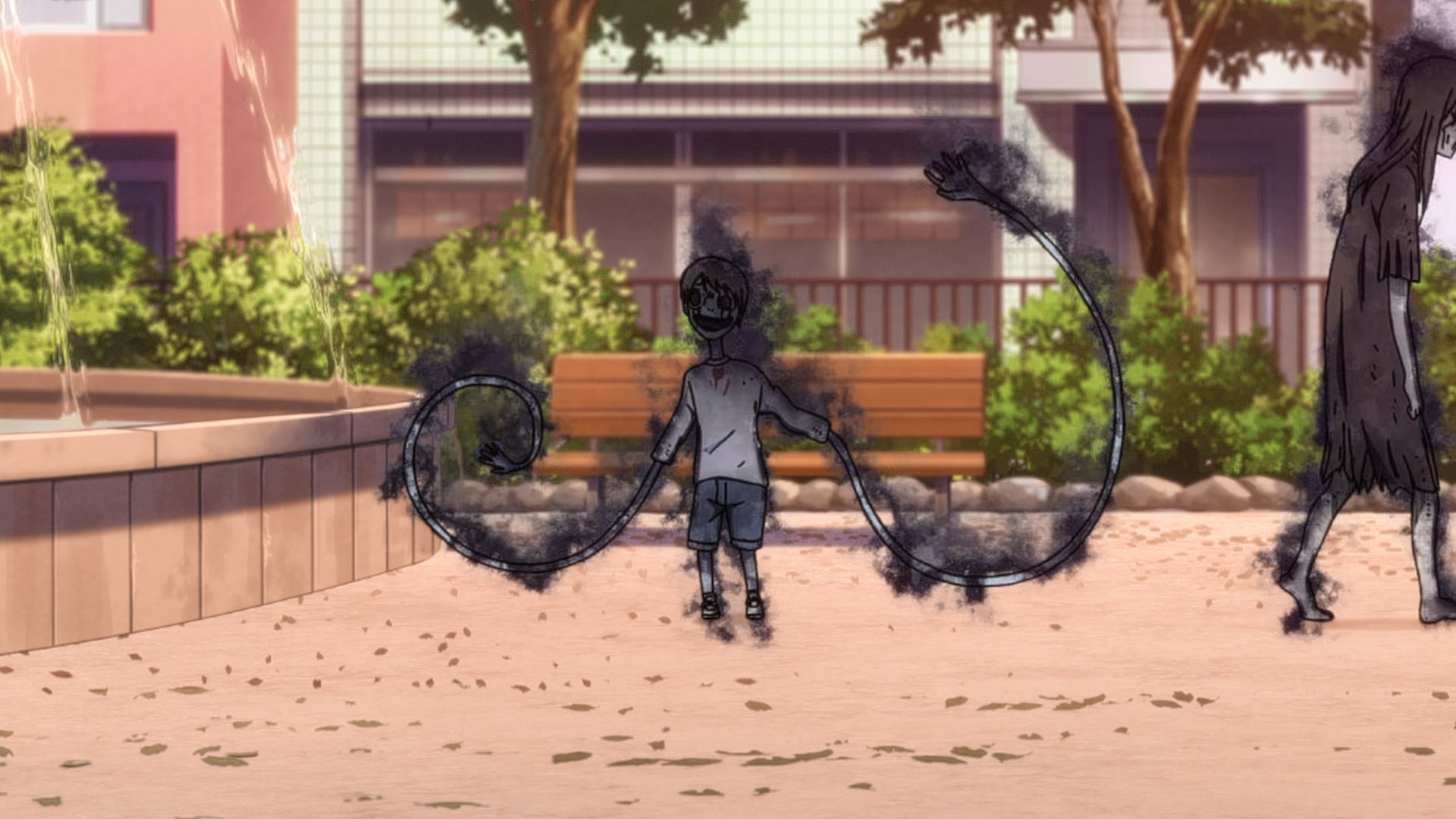 That boy is actually a spirit and it has noticed Miko! It lunges at her and just when Miko fears the worst… The spirits from the shrine show up once more and attack the hostile spirit. This initial attack does not stop the ghost who not only recovers from the blast but destroys one of the spirits! It takes a second shot to bring it down and all this leaves Miko gasping!

This frightful incident reminds her of that time in the shrine when the big spirit said three times. It slowly dawns on her that three times meant the shrine spirits will protect her from monsters on three occasions. But considering that was already the second incident she can’t afford many more slip-ups…

Later in the day we see two of Miko’s classmates walking down the street enjoying a nice sandwich when a shady little guy streaks into an alleyway to find a cute kitty. Looking at the cat the man brings out some vicious looking pliers and you just fear for the cat’s life… That is until one of the girls hears the cats meows and they decide to check it out hoping to feed the cat. The guy scurries away and all is well. But will the next cat be so lucky? 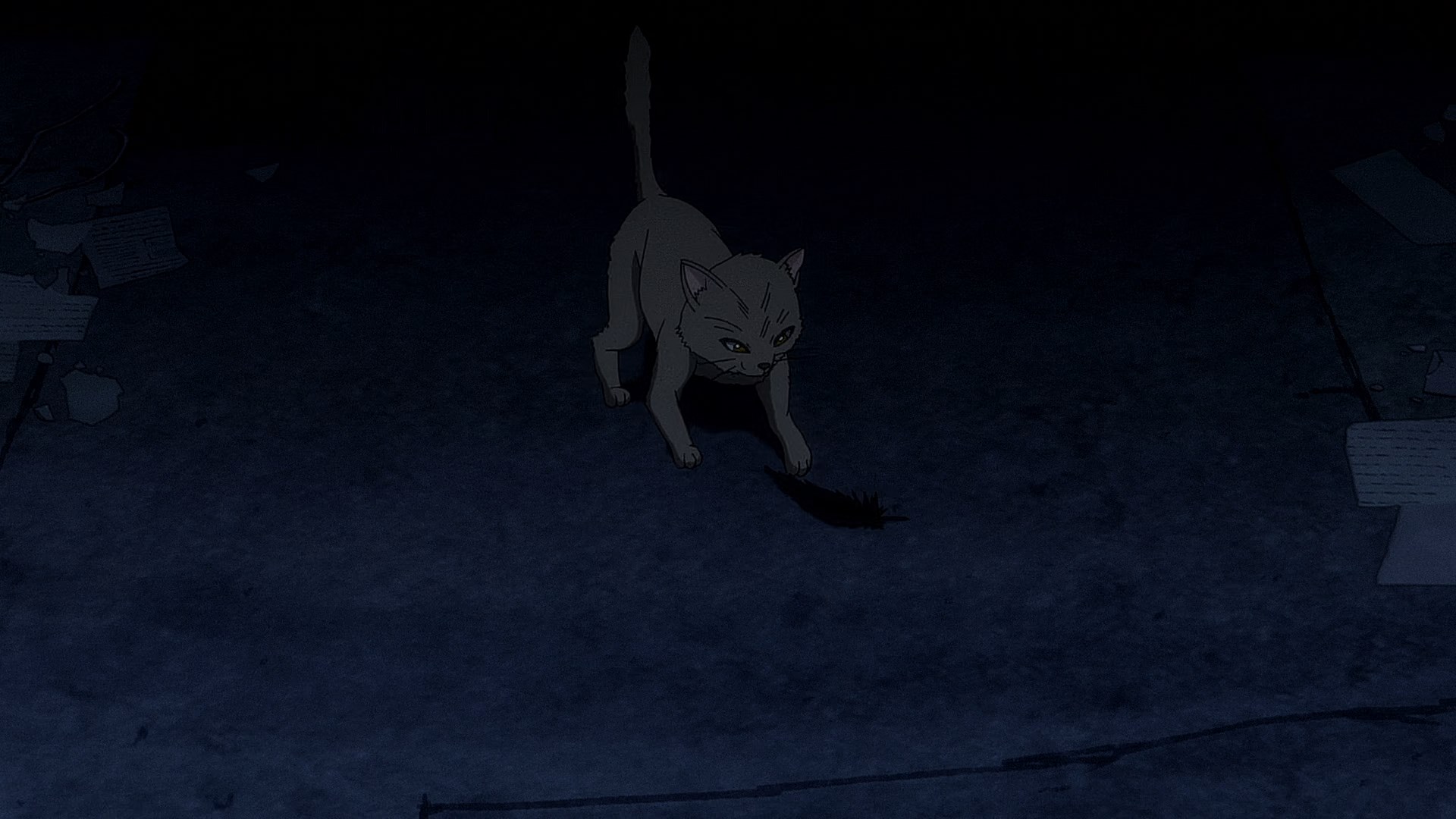 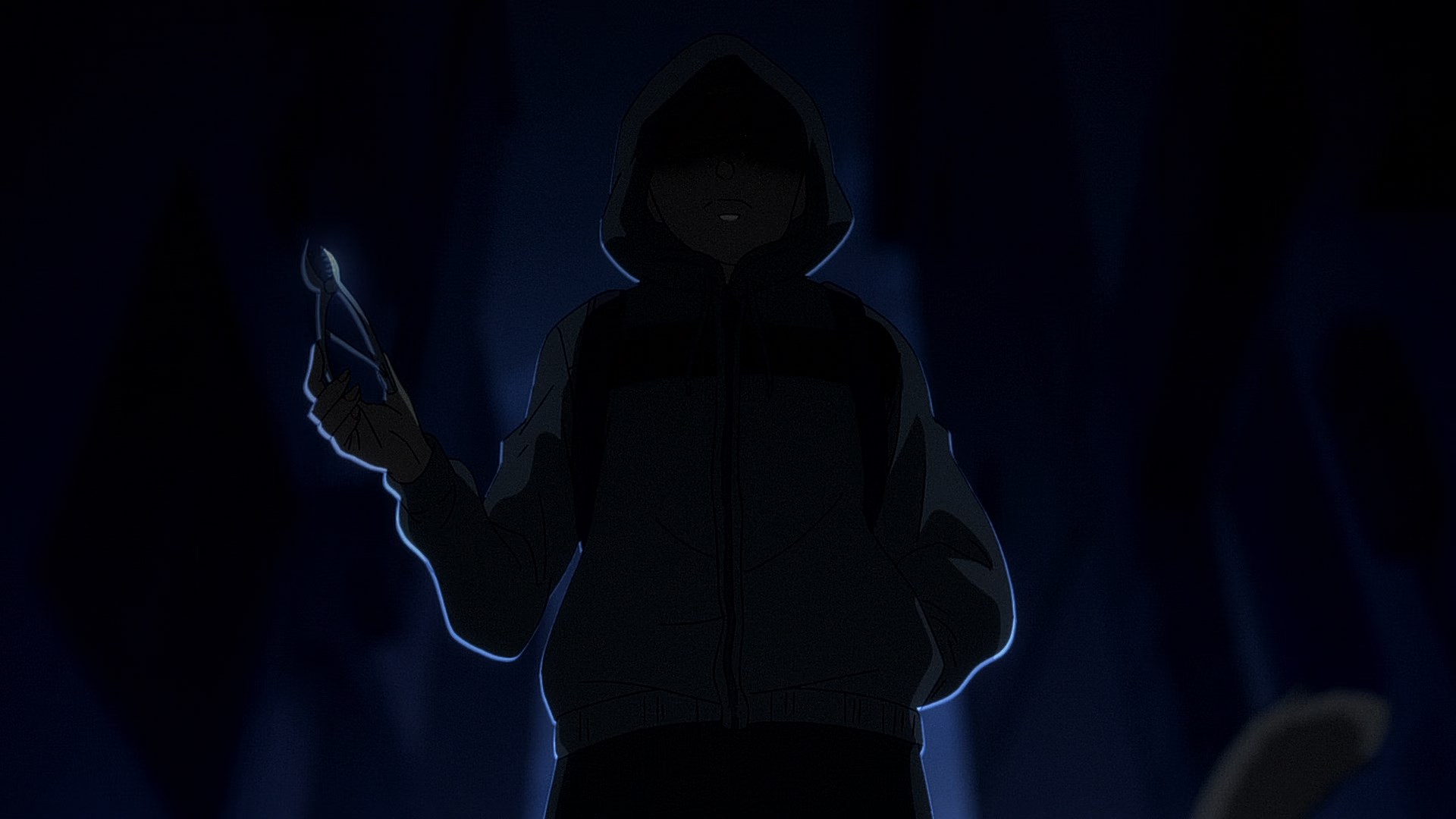 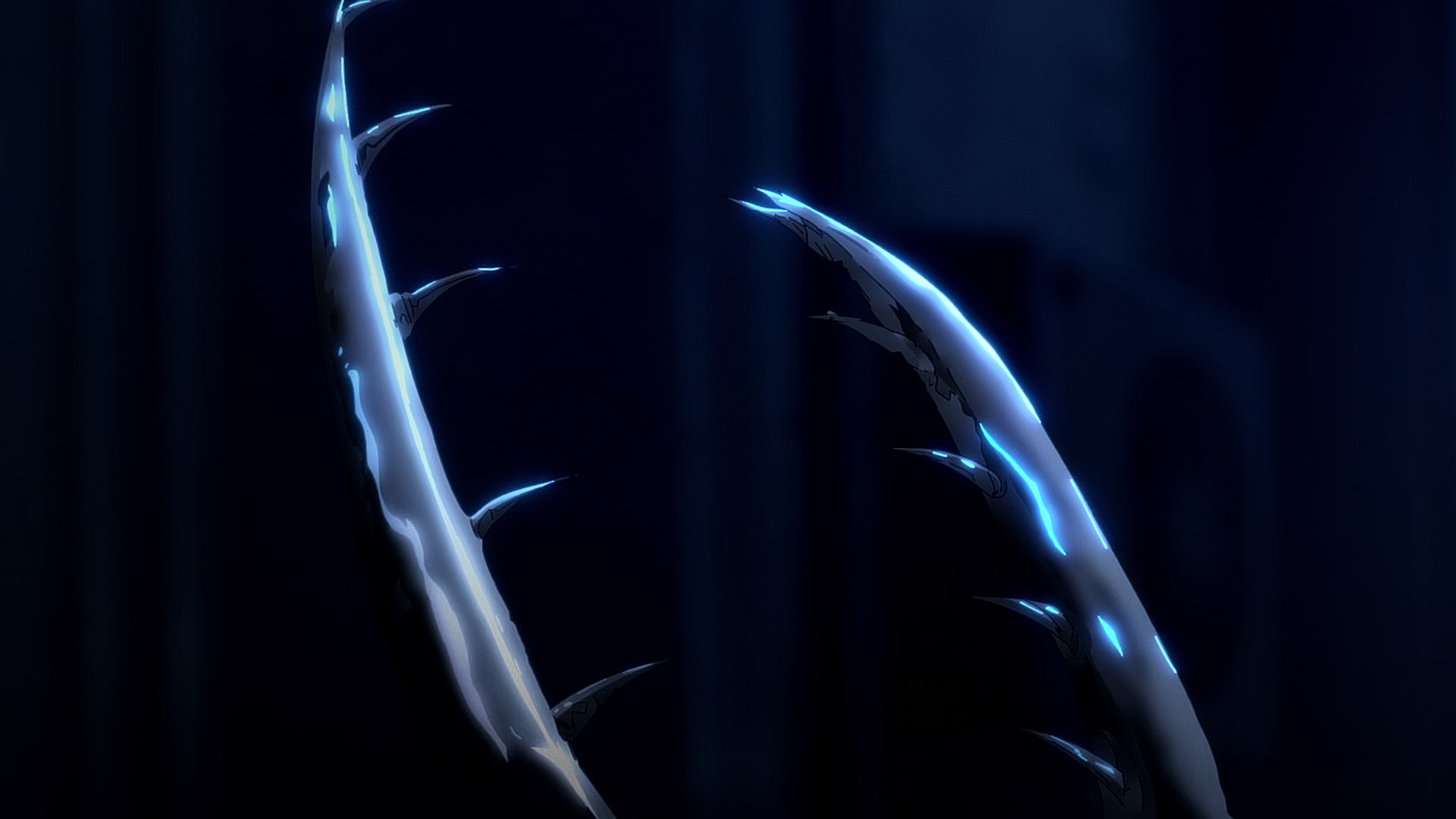 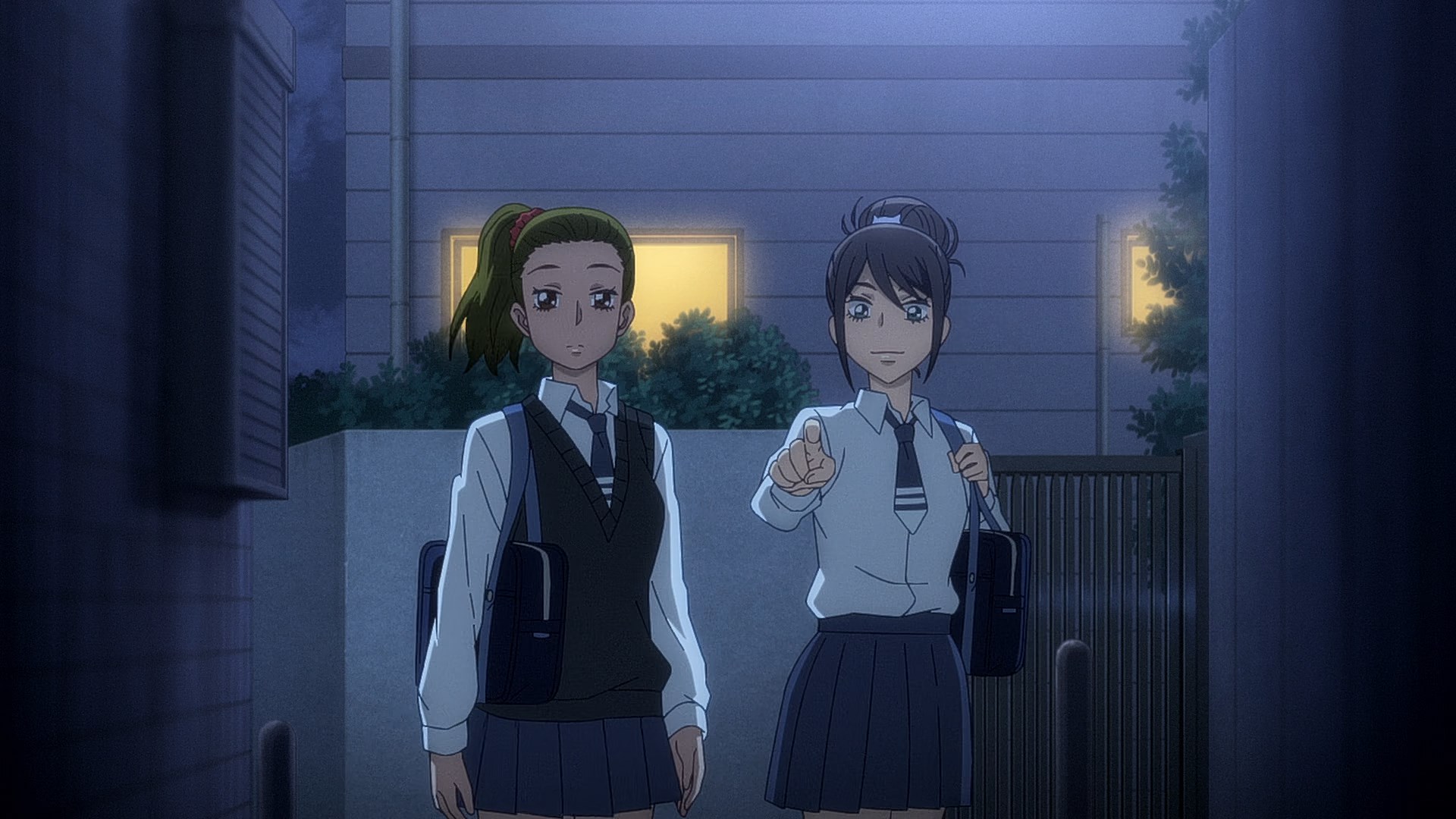 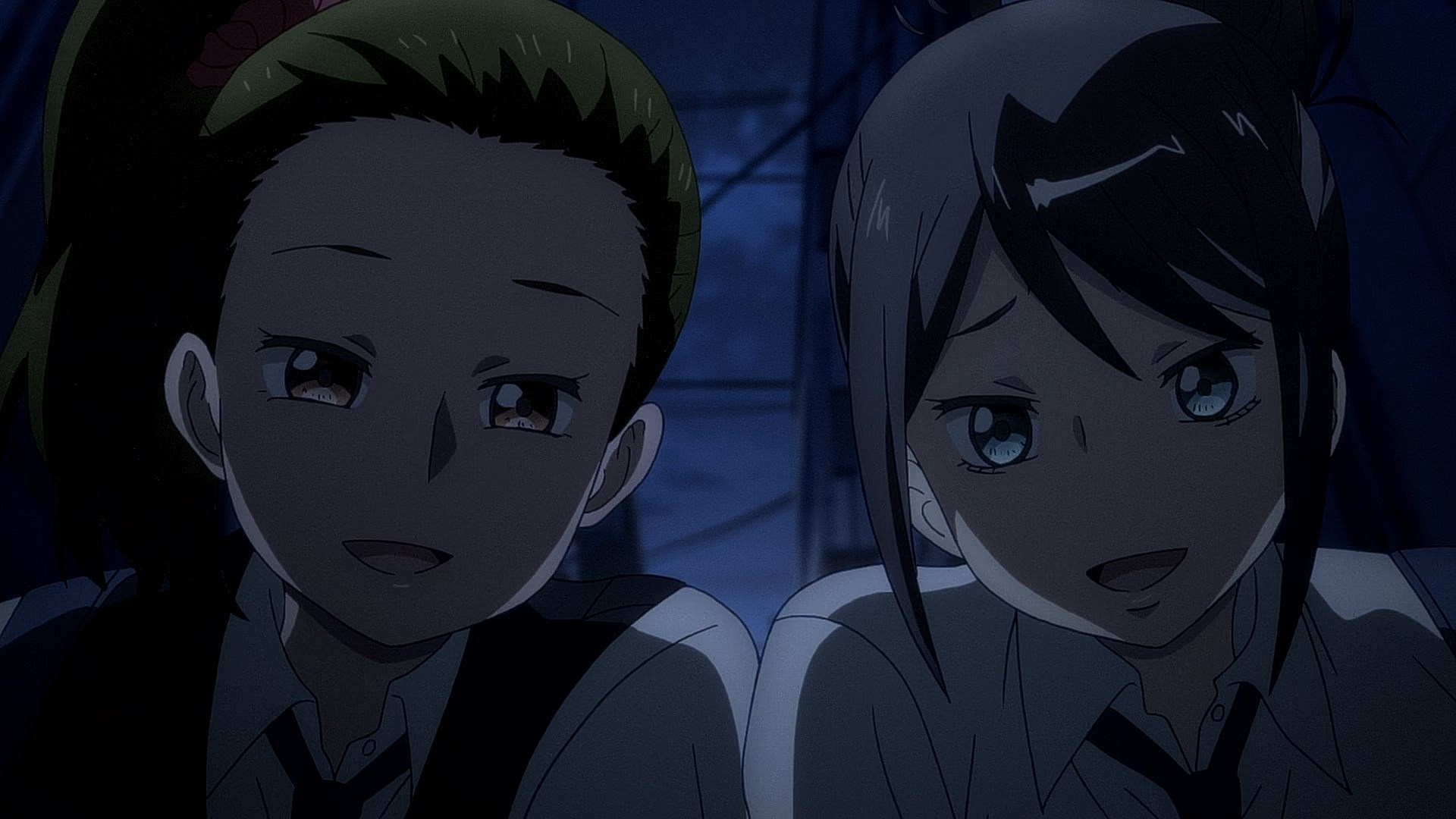