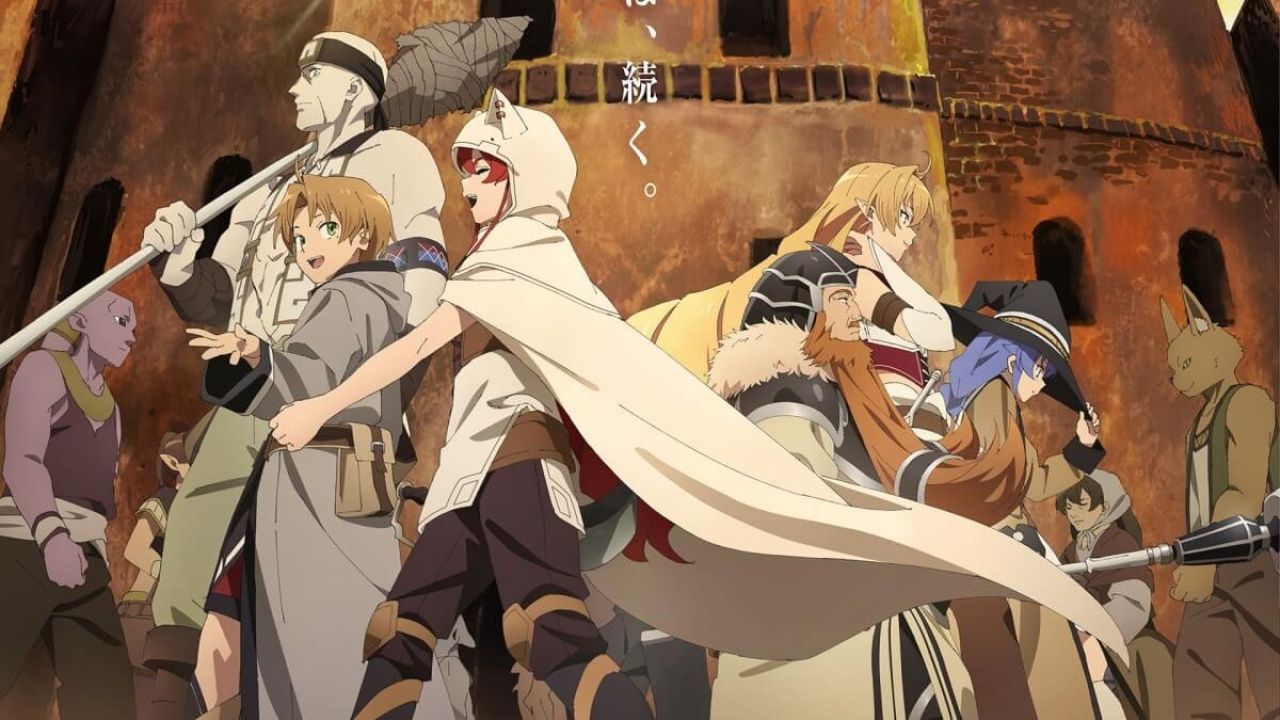 Synopsis: Part 2 of Jobless reincarnation is an immediate continuation of events from season one therefore it is highly recommended you watch part one before seeing this. For newcomers to the series Jobless Reincarnation is an isekai series that tells the tale of a pervy 30-year-old NEET shut-in who dies and is reincarnated as baby boy named Rudeus Greyrat.

Growing up in a loving family it is soon becomes clear Rudeus is a talented magic user and because of his talents is trained under Roxy to develop his skills further. The story in season covers Rudeus as he grows up and when he reaches his teenage years is assigned the role of teacher to the unruly, Eris. It is here where we discover the political dynamics of the world and are introduced to the social strives that is rife in the land. All these issues are rolled with a sense of adventure and a slice of ecchi! The series climaxes with Rudeus and Eris becoming stranded on an island far away which is where part 2 takes off from.


Thoughts: The story summary may sound generic and the genre oversaturated but as they say: don't judge a book by its cover! Jobless Reincarnation was one of the better series to originally air in the winter 2021 season. I would recommend giving it a go but just beware there is some ecchi scenes in this one. The main protagonist Rudeus is a pervert but more than that while we never see sex we do hear his parents going at it several times in season one. Not only that but one of the main girls; Roxy gets swept up in the ecchi action and decides to do a little self-service! Those are the main ecchi bits that separate this from the usual anime ecchi affair. There is also another scene of a similar nature in season two so keep that in mind before going into this.

I will say that while there is certainly ecchi in Jobless Reincarnation this is primarily a fantasy story and the anime mainly focuses on storytelling. If you are after pure ecchi avoid this title and for people who are not interested in ecchi don't fret. This is a good story with a ecchi thrown in. It is not the dominate theme so if you came for a good story then you are likely to enjoy this!

As for the opening two episodes, things kick off in a decent fashion as we find Rudeus and his team are figuring out how to get back home. What I found good about this starter is while the show does follow Rudy and Roxy they spend time showing things from both perspectives giving us a better idea of what is going on in this strange island. The episodes also do a good job in reminding us about how the key players behave so for newcomers or people who simply watched the original series in time it was good intro to get us up to speed.

We also get some decent plot developments as a notable chance encounter gives something of significance to Rudeus. How this thing is used is an open question but important it will be. They also solve some problems but then the resolution lands them in heavy water and that is where the second episode ends. Yes a cliff-hanger already after only two episodes. I will add nestled in all this story are not one but two perverts so prepare some lewd moments. Promising start so I give this a 7/10 after two episodes.
Confused about the monsta review scores? Then check them out with the link here!

General commentary:
This story is an odd one- it's not particularly smart, it's not particularly heroic, and it's not particularly noble... but as slice of life fantasy goes... it's surprisingly a pleasant read despite the ecchi moments being in all manner of tastes, some highly questionable. Just about every character in it gets a fair amount of development, even the obvious fanservice characters. It's also one of the older Isekai/Tensei web novels, so don't expect much in the way of novel or innovative thinking if you're an addict of the genre- it's pretty much a Slice of Life starring an unlikable bum turned charismatic kid by the whim of Truck-san. Well executed, but we've seen a bunch of these tropes shamelessly stolen from it and reused many times by now.

The character of Rudeus rather convincingly sells the idea of an overpowered Isekai protagonist living day to day, just trying to figure out how to get by in a world where no matter how strong he gets, there's always a bigger fish and he's usually running from it in terror. In fact, from the world's point of view, Rudy is fundamentally defective as a warrior- he can't use Battle Aura, a fundamental basic that even children can use. It's so basic no one can even explain what it is to him, leaving him with only his wit and mastery of Magic.

Season 2 commentary:
I'll kind of lump the first three episodes into one short spoiler for brevity and just in case anyone hasn't picked up Season 1 yet.


The season picks up right where the last one left off, reintroducing us to everyone as if we'd just left off from Season 1 the week before. Rudy gets one of his signature Chuunibyou abilities, the Demon Eye of Foresight, and gets the party off of the Demon Continent, narrowly missing a meeting with Roxy and two of his parents' old adventuring companions. His trip across the ocean puts him squarely in Ghislaine's home terf, and... he ends up mofumofu-ing a sacred beast. (I mean... you would too, get a load of that fur.)

Staff member
Fansub TV Team
Sounds like you read quite a bit of the manga Norren. Is the anime providing a faithful adaption so far? The bigger question though is can we expect bigger and better things in the upcoming episodes? Not expecting any specific comments just general comments and sentiments.

I would agree that the series is not original but to me it is not the destination but the journey that matters. If you create a compelling story then the lack of originality doesn't bother me much.
Confused about the monsta review scores? Then check them out with the link here!

monsta666 said:
Sounds like you read quite a bit of the manga Norren. Is the anime providing a faithful adaption so far? The bigger question though is can we expect bigger and better things in the upcoming episodes? Not expecting any specific comments just general comments and sentiments.
Click to expand...

In general it's pretty close. Every now and then there's a subtle skip or tweak for flow here and there, but it's quite the faithful adaptation. To be honest, it's more accurate than the original English release of the novel. (The translator tried to brush some of Rudy's 5 year old perversion antics under the rug.)


monsta666 said:
I would agree that the series is not original but to me it is not the destination but the journey that matters. If you create a compelling story then the lack of originality doesn't bother me much.
Click to expand...

Yep! And this one really is a meandering slice of life story. Being so old, and long running, it has many a twist and turn left in it, too.


Norren said:
Yep! And this one really is a meandering slice of life story. Being so old, and long running, it has many a twist and turn left in it, too.
Click to expand...

This is certainly the vibe I can get from the show in the last two episodes. It seems like it is one adventure after the other as we see them not only scramble against some smugglers but then Rudeus gets caught up in some mad misunderstandings and lands up in the slammer. The third episode had a bit of everything from comic relief, action and then even drama as I got some season one vibes. I am sure Rudeus would have got similar feelings considering the position he found himself in against his adversary. The final moments also had a dose of drama and you got to think the implications there will be felt soon enough...

Fourth episode definitely had a slice-of-life vibe but of the exotic kind. Lots of cuties to be seen so I can understand where our main protag is coming from with his perverted antics. He should have taken "responsibility" for his actions! XD Having one of those girl as a tag along would have been nice and it would have been funny to see Eris get a little jealous with the new addition to the group.

Cuties aside, this was for the most part a feel good episode with a little backstory thrown in but with this section of the story done and dusted I just wonder what further adventures awaits this trio. I am hoping there is a reunion with Roxy sometime soon. Any chance of that happening?
Confused about the monsta review scores? Then check them out with the link here!

Staff member
Fansub TV Team
The past two episodes have been great. Rudy finds himself once again in jail this week, lol. He even repeats the same salespitch joke and snarks "wait, I've already done that bit before" Of course, the best part here is the introduction of Rudy's number one disciple! Zanoba is great. The man really knows how to appreciate a doll. (and not much else. Alas, poor Ginger.)

How many episodes are we getting this season, anyway? Only one more? I'm sure I'm forgetting some stuff because of one memorable moment that I think is going to be left for the end of season, but I'm not sure how they're going to split the next few scenes up if there's two eps left. Although... at the same time... Fitz is in the op/ed..? /boggle


monsta666 said:
Cuties aside, this was for the most part a feel good episode with a little backstory thrown in but with this section of the story done and dusted I just wonder what further adventures awaits this trio. I am hoping there is a reunion with Roxy sometime soon. Any chance of that happening?
Click to expand...

Alas, Roxy will not be returning to Rudy's life this side of adulthood. That said, her return is rather significant and awesome when it does happen. That's probably going to be the climax of S3 if we get it.
You must log in or register to reply here.